A Map of the Open Country of Woman's Heart 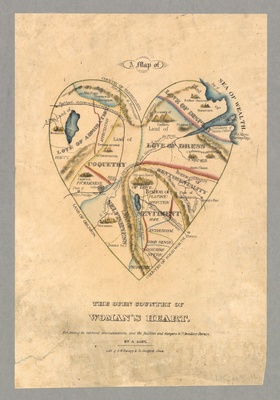 A Map of the Open Country of Woman's Heart

This hand-colored satirical map provides a window into dominant nineteenth-century beliefs about women’s moral character and interior lives. Though not a valentine itself, satirical maps such as this one sometimes appeared on vinegar valentines. This type of map was inspired by matrimonial maps. The "open country of woman's heart" is divided into various regions, each representing a different trait, feeling, or interest. Toward the bottom right corner of the map, a region called "Sentiment" is enclosed by the "Ego Mountains." Colored yellow, it is clearly distinguished from the other regions that make up a woman's heart. These mountain's separate women's positive qualities, such as love, hope, and enthusiasm, from the undesirable qualities that make up the rest of the map. Created during a time of westward expansion into the land bought some thirty years earlier in the Louisiana Purchase (this was drawn before the Mexican-American War, which would result in another large land acquisition), this map reflects American interest in the exploration of both physical and emotional realms, casting the emotional landscape as a geographic space to traverse.