The valentines Americans sent one another during the second half of the nineteenth century were not all love and sweetness. In fact, it was very common for people to exchange vinegar valentines: cheap, crudely illustrated woodblock prints featuring caricatures and insulting poems designed to ridicule the recipient. These engravings had a wide range of aims. Some insulted an individual’s appearance or lack of talent, while others targeted members of certain racial groups or political parties. In short, when it came to these vitriolic prints, no one was absolutely safe from public derision. 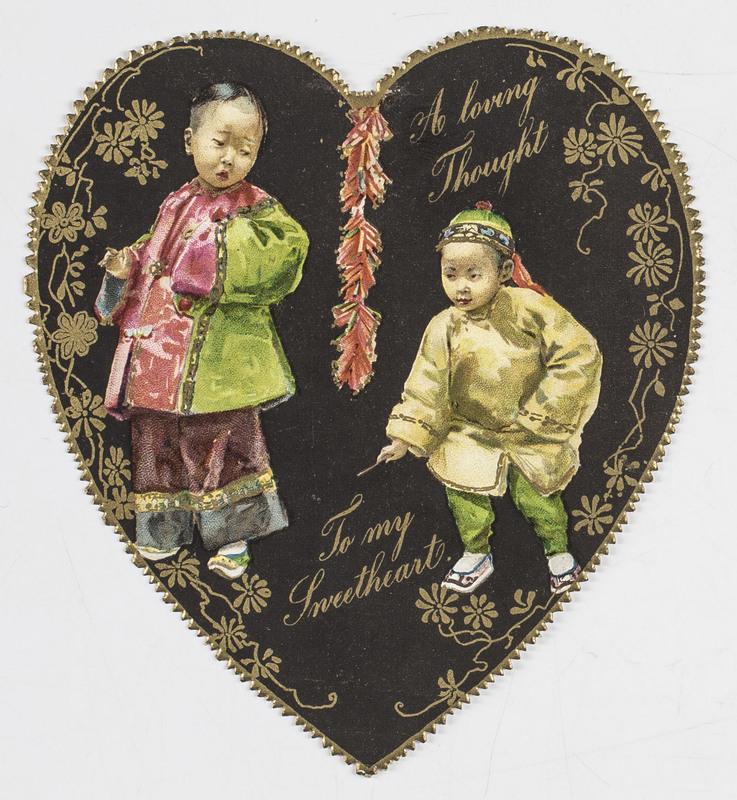 Though they were seemingly antithetical to a holiday centered around love, vinegar valentines made up more than half of all valentines sales in the mid-nineteenth century. They encouraged social cohesion mostly indirectly, by ridiculing individuals who deviated from social norms. As such, they served as a powerful instrument for the policing of public morals.

Vinegar valentines were not the only types of valentines to perpetuate gender stereotypes and racial prejudices, however. Among the more traditional, sentimental valentines, many relied on common stereotypes about racial and ethnic minorities to convey their messages of love. Valentines frequently featured, for example, Orientalist stereotypes, which perpetuated the notion that Asian people were exotic and mysterious, highly susceptible to irrational, superstitious beliefs, and inherently inferior to their western counterparts. Many of these stereotypes originated from European colonialism and became more prevalent in the United States as the number of Chinese immigrants increased throughout the nineteenth century. Valentines and other printed ephemera reveal how racist ideologies, which reinforced Western cultural, political, and economic hegemony, permeated numerous aspects of Victorian popular culture, including how individuals chose to express their feelings towards one another.