Between 1840 and 1890, the American valentine industry reached the height of its popularity thanks, in large part, to the industrialization of the printing industry. At the same time, successive waves of immigration and westward expansion transformed the country’s physical landscape and racial and ethnic makeup, giving rise to new ways of understanding and representing the nation. The influence of immigrant cultures and global trade is evident in the use of European artistic techniques and materials in the creation of valentines, from German scraps to English paper lace, as well as numerous other aspects of the seemingly all-American holiday. 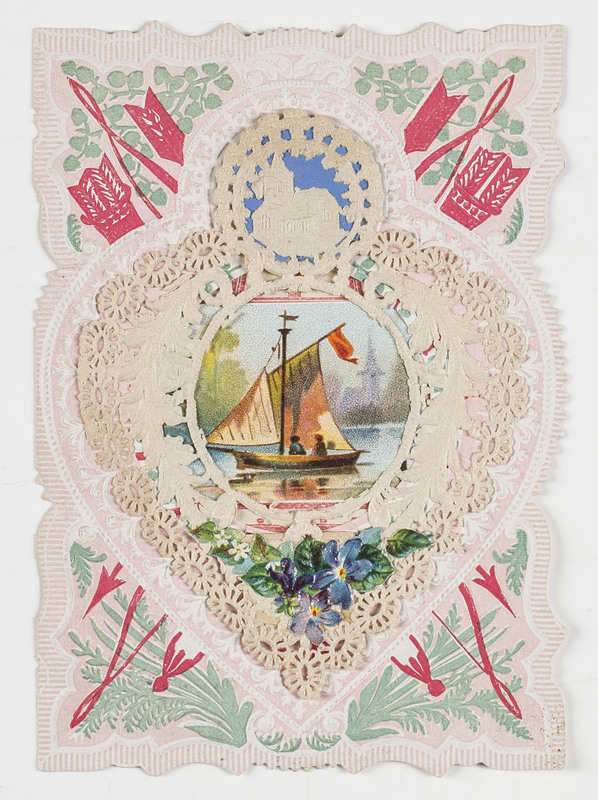 Valentines often alluded to travel through their representation of different modes of transportation, including boats, cars, and even spaceships. In so doing, commercial manufacturers connected the modern tradition of sending love missives on Valentine’s Day to stories, both historical and fictional, of lovers overcoming vast distances to be with one another. The increasing efficiency of the postal service over time made it easier for people separated by long distances to communicate with each other. With the establishment of new territories in the west, the increased demands on the postal service led to its expanded and expedited operations. By 1822, it took eleven days to transport mail the six hundred sixty-six miles between Nashville, Tennessee and Washington, D.C. In practical terms, the establishment of the modern postal service around 1870 marked a major turning in point in the speed with which ideas and emotions could travel across space. Emphasizing themes of mobility, the iconography of valentines suggests that Americans were taking full advantage of the enhanced capabilities of the postal system, sending their cards across vast distances using boats, railroads, cars, and eventually even airplanes. In most cases, however, the sender and recipient lived in the same town or city. For many, the main appeal of the modern postal service was the anonymity it provided. Traveling from one end of the city to the other, burdened by heavy loads of valentines, mailmen supplied not only love messages but also an added element of mystery to the holiday.

Meanwhile, cartography and map imagery of all kinds pervaded nineteenth-century print culture. Incorporating allegory and wordplay, matrimonial maps originated in the late sixteenth century and remained popular until the 1850s. These maps provided representations of the invisible, emotional aspects of life and articulated societal beliefs and attitudes towards courtship and marriage. It is hardly surprising that these would sometimes make an appearance on vinegar valentines, which likewise used humor, mockery, and insults to police morality.

Ultimately, the representation of transportation methods and maps on valentines enhanced the myth of love as transcending both time and space. With every technological advancement, it became easier for both the producers and consumers of sentimental imagery to spread the ideal of timeless love--whether across the street or halfway around the world.

From Here to There →
Long Distance Relationships