Imagine opening an email to find a Valentine’s Day greeting, perhaps a GIF of a dancing red heart. How long do you look at this digital greeting before moving on? In all fairness, it would not occur to most recipients to archive these greetings, impersonal and transient as they are. Though ecards of all kinds have gained popularity as they have become a more established form of communication, they are still generally regarded as less meaningful than their physical counterparts due to the greater ease with which they can be sent. In contrast, collectors have preserved valentines for centuries. This exhibit displays valentines created from the 1830s through the first decade of the 1900s, with the majority created in the nineteenth century. Their sentimental value seems to lie in their inherent physicality and the ability of handwriting and textured materials to evoke sentiment. 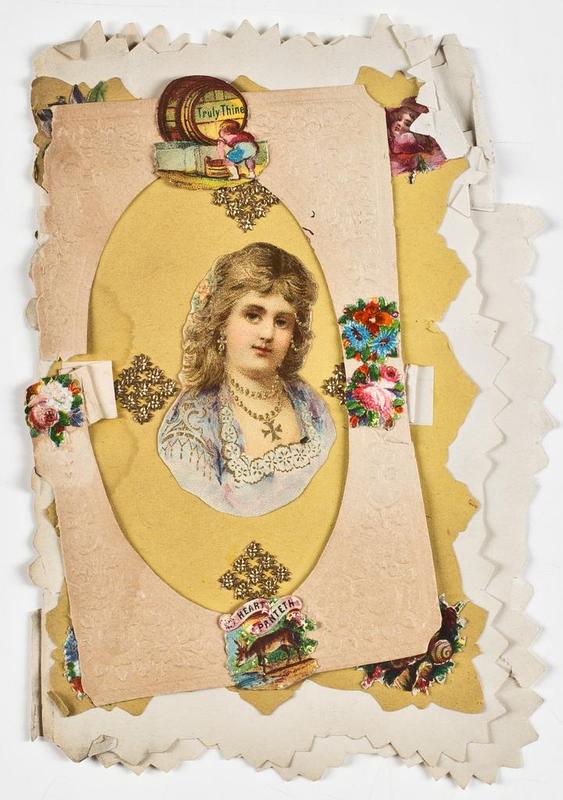 In England, the exchange of gifts among men and women as part of the celebration of Valentine’s Day was popular in the seventeenth century. Paper valentines, including both cards and letters with personal mementos, became more common in the eighteenth century. Though the holiday was rarely celebrated in the United States before roughly 1840, the practice of exchanging cards quickly gained popularity after that point. Many early valentines were either imported from England or handmade. In the following decades, commercially manufactured valentines made of gold leaf, scraps, and paper lace, such as those produced by the likes of Esther Howland and George C. Whitney, became more prevalent. For individuals who preferred to send handmade valentines, stationers sold the materials listed above, allowing them craft their love missives themselves. The Two Bachelors valentine, created in the 1830s, demonstrates how senders could construct a uniquely personal valentine using commercially produced materials. Gifting a lock of hair or infusing a letter with perfume heightened the physical and emotional effect of the valentine, be it handmade, partially hand-made, or assembled by workers in a factory. Intimacy was developed through the physical or visual evocation of personal touch, which could take the form of a hand-drawn image or a printed representation of the brush of two fingers.

In the case of handmade valentines, the time devoted to crafting a valentine was increasingly viewed as a measure of emotional dedication existing in a familial or romantic relationship. The small imperfections included with a handmade valentine were regarded as measures of value compared to an equivalent machine-made valentine. Through the study of these paper artifacts, we seek to understand the sentiments and relationships that these cards represented to their original senders and recipients as well as their later collectors.