The Dying soldier together with the Galley slave

The highly sentimental poem “The Dying Soldier” appeared in Poulson’s American Daily Advertiser on August 2, 1805, copied “from a late London paper.” A headnote accompanied the text: “The following lines are nearly a correct account of an incident, that occurred during the last campaign in Egypt, which the author, hearing related in company, versified at the request of a friend, without quitting the room.” Although it was printed in Boston in Budget of Mirth, it is hardly a mirthful text (Wild 68-69).

“The Galley Slave” is a sentimental lyric written by John C. Cross for William Reeve’s Purse; or, Benevolent Tar (1794) (Philbrick 256; Schnapper 880). Cross was an actor who worked at the King’s Theatre in London. His name has been given as James, but “in fact it was John” (Fiske 565-66). The slave is a sailor from a captured ship who has been sold to the captain of a galley, a long narrow vessel of ancient origin propelled mostly by oars. In the early nineteenth century, North African galleys cruised the Mediterranean and European waters as pirates, manned by captives and prisoners of war, preying on ships for crews and spoils. According to Richard Morris,

In order to buy immunity from interference with American commerce along the North African coast, Washington and Adams continued the custom, established by the British, of paying tribute to the pirates of the Barbary States (Algiers, Morocco, Tripoli, and Tunis). When the Pasha of Tripoli increased his demands for tribute and declared war (May 14, 1801) against the United States, Jefferson, although favoring economy and peace and opposed to a navy, decided to resist and dispatched warcraft to Mediterranean waters . . . a vigorous blockade brought the [Tripolitan] war to an end in 1805 (but the payment of tribute to other Barbary States continued until 1816). (131)

Ishmael Spicer knew the song as “The Galley Slave; or, The American Captive in Algiers,” putting an American spin on the English song (124). Possibly the widest spread of all the texts in the Thomas collection, appearing in 113 songsters between 1795 and 1820, the song appeared on sheet music and in songsters and slip ballads well into the nineteenth century and the tune was copied into manuscripts by many musicians (Schnapper 880; Roud; R. Keller, Early American Songsters).

The somewhat common one-verse filler text “The Garden of Love” uses a Raree-show technique to make its rhymes. This early eighteenth-century tradition adds “-a” to the end of words and is a parody of the halting speech of foreign street-show vendors making rhymes in a language that is new to them. “Norah” may refer to the principal female character in Shield’s Poor Soldier but this verse is not otherwise related. The text appeared in three songsters between 1792 and 1808, including National Songster (74; R. Keller, Early American Secular Music and Its European Sources); it also appears on the broadside The Poor Little Child of a Tar.

Tumult of battle had ceas'd.
Oh! think on my fate, once I freedom enjoy'd. 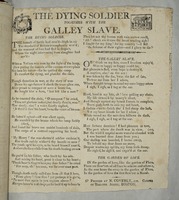 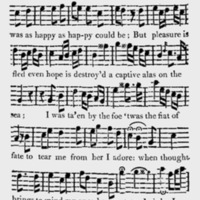 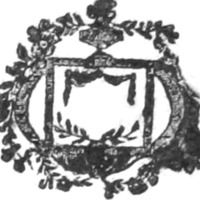 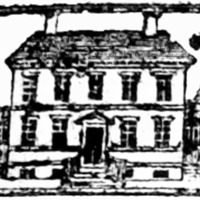