The farmer's daughter; or Barley maid

Click below to hear a variant of the tune for this ballad, "Oyle of Barley" performed by David & Ginger Hildebrand

Here is a resourceful woman who knows how to manage her situation. She plays the would-be seducer for all he is worth, then leaves him high and dry on the bank of a river that she knew she could cross but he could not.

An earlier title for the superb tune of this song was “Stingo; or, The Oyl of Barley” and it was included with a dance in the Dancing Master (1651-90). Many lyrics were set to the tune, all having in common the metaphorical themes of strong ale and of “selling barley,” the feminine equivalent of “sowing wild oats.”

In 1688, a “new Scotch Song” set to the tune appeared. Written by Thomas D’Urfey, it began “Cold and Raw the North did blow” and it used the themes and some of the language of earlier texts, particularly the last line, “go home in the morning early” (Roxburghe Collection 8:234; Simpson 690). With this song came a new popularity for the melody. D’Urfey’s song soon acquired a sequel entitled “An Answer to Cold and Raw,” beginning “Riding down a narrow lane, two or three hours after.” The two parts can be found together in a broadside entitled The Northern Ditty; or, The Scotsman Outwitted by a Country Damsel. To a New Scots Tune. Here in the second part of the song, the girl outwits the man who is now identified as a “Scotsman.” The Coverly version of the song includes both parts plus a new final verse that ends: “Be constant to your partner, lest you be serv’d as I have been, by this sly farmer’s daughter.” This moral is not present in the original “second part” nor is it included in later slip ballad versions of the song. In the early nineteenth century many broadside ballads have an appended moral. They may have been added to ward off objections to the song’s content at this period of heightened public concern for social behavior. The composite song, often truncated and usually without the moral, was printed in many later broadsides as “The Maid That Sold Her Barley” (Roud; New Academy 127-33). This text appeared in five songsters between 1799 and 1819 (R. Keller). 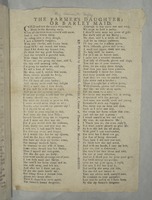 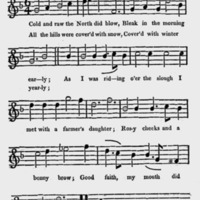