The Duke of Cumberland's frolick

While the concept is rare in broadsides there are a few songs, such as The King and the Miller of Mansfield and The Geud Man of Ballangigh, that celebrate capers in which monarchs or nobility go among their people in disguise to ascertain their reputation and the people’s degree of loyalty. “Frolics” usually describe juvenile escapades of nobility in which they break the law and then face down the officials in court. Humiliating the lower orders and often injuring them was part of this sadistic recreation.

This comic tale combines the disguise story thread with the impressment issue, which may be the reason for its printing in Boston. From the references in the text to “butcher” (verse 6) and “You’re fat enough” (verses 4 and 7), it is clear that the duke is William, Duke of Cumberland (1721-65), brother of King George III. Cumberland’s cruel treatment of the Scots after Culloden earned him the sobriquet “the Butcher,” and he was a very fat man.

In the song, he and a friend go off disguised to see “what usage have brave sailors.” They are pressed and taken to a ship where they give the officers a hard time. Cumberland eventually earns a whipping for his insubordination, and in the process of undressing him, the boatswain’s mate sees the star of his station. The crew members fall on their knees and beg forgiveness, and Cumberland dresses them down for treating sailors so cruelly.

The song was printed on nineteenth-century slip ballads (Roud) and a fragment appears in the Greig-Duncan Folk Song Collection (1:8). The only hint of an associated tune is the addition of the word “sirs” in verses 8, 9, 10, and 12, a filler usually found with the tune of “Yankee Doodle” (see The Yankees Return from Camp).

Duke William and a nobleman. 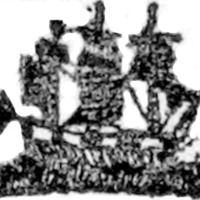