Tom Tough: together with Crazy Jane

“Tom Tough,” the rollicking Charles Dibdin lyric titled “Yo, Heave Ho” in A Tour to Land’s End (1798), is a patriotic recruiting song for seamen. It gives details of the perils of the sailor’s life, but shrugs them off with a “yo, heave ho.” The list of commanders Tom claims to have served under comprises most of the admirals of the fleet from the 1750s to 1800, Edward Boscawen (1711-61) being the earliest of the group. Like so many of Dibdin’s light works, this song was printed in sheet music editions, broadsides, newspapers, slip ballads, and in songsters well into the nineteenth century. The text appeared in twenty-eight songsters between 1801 and 1820 (Wolfe, Secular Music #2510-12; R. Keller; Roud).

The early seventeenth-century song “Tom a Bedlam” is probably the oldest of the English “crazy” songs. Claude Simpson outlines its long life as a tune and model for updated texts (710-13). Few such lyrics were written until the mid-eighteenth century, when sentimental and emotional songs became a popular genre and a spate of “bedlamite” songs appeared. Bedlam was the common name for the Bethlehem Royal Hospital in St. George’s Fields that was converted into a hospital “for lunatics” in 1547. The hospital had become a popular tourist spot where people went to look at the residents and marvel at their odd appearances and behaviors, their admission fees helping to fund maintenance of the facility. In the 1770s, authorities came to understand that this atmosphere “tended to disturb the tranquility of the patients” and the practice was discontinued (Wheatley 1:171-73).

The author of “Crazy Jane” is Matthew Gregory Lewis (1775-1818), an English novelist best known for his sensational novel The Monk (1796), a work that introduced the violence of German gothic literature to the more mild gothic form first exploited in England by Horace Walpole in The Castle of Otranto (1764). The text was published in songsters, sheet music, newspapers, and on many broadsides and slip ballads well into the nineteenth century. The text appeared in sixty-three songsters between 1800 and 1820 and at least seven American newspapers between June 1799 and July 1801 (Roud; R. Keller, Early American Songsters; Wolfe, Secular Music #6, #2186, #10199; Sonneck, Bibliography 93-94).

There are several musical settings of the lyrics. One specifies the old Scots tune “Fy gar rub her o’er wi’ strae,” which begins “Gin ye meet a bonny lassie,” a text that echoes that of “Crazy Jane” and thus may be the original inspiration and tune setting.  Publication records in the British Union-Catalogue indicate that several composers also set the very popular text in the 1799-1800 period, including Harriet Abrams, J. Davy, George Kauntze, Baron G. H. Nolcken, and George Ebenezer Williams. Their melodies made their way into a number of British and American handwritten tune books as “Crazy Jane” (Schnapper; R. Keller, Early American Secular Music and Its European Sources).

On the back of Joseph White’s broadside, Tom Tough, is printed a government customhouse form for the district of Boston and Charlestown. It is not likely that either White or Coverly had contracts for government printing as their operations were very small and they could not fulfill large print runs. It is more likely that this was scrap paper obtained when the form was changed or the government printer had waste of which to dispose.

My name d'ye see's Tom Tough.
Why, fair maid, in every feature, are such signs of fear express'd. 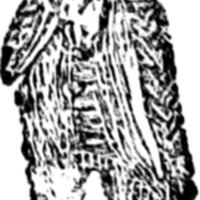 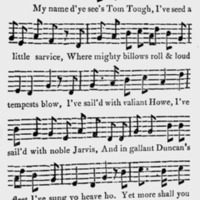 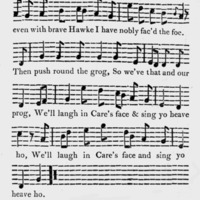 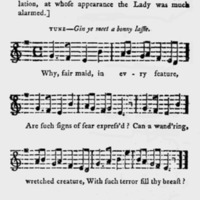 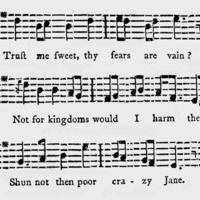 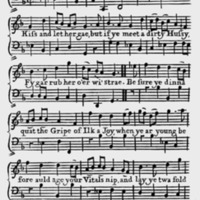