The Chelsea butcher. A tragical account of the cruel murder, of three innocent creatures, by a butcher in Chelsea. Tune--Moll Row

Both texts and illustrations on this broadside are related to the main song—from the woodcut of the catlike dog and the three coffins to the second lyric mourning the three murdered cats. The details of the gallows-humor event and the specific name of the butcher, Green, in the second song, suggest that it probably did happen. The reference to “a Lord or a Knight” and the “cats in the Parish” suggests that the narrative was imported from England—Winnisimmet, Rumney Marsh, and Pullen Point joined to become the town of Chelsea, Massachusetts, in 1739; it would not have been called a “parish.” That the butcher now sees visions and apparitions is a natural follow-up from such a gruesome act that was not punishable by law but certainly was considered less than acceptable by members of the community. For centuries, cats have been treated with awe or disdain, worshiped in some cultures, considered consorts to witches in others. By 1814 in Boston, they were most likely to be inoffensive and useful creatures without emotional baggage.

Good people draw near to my ditty.
Dear cousins all come hear my story. 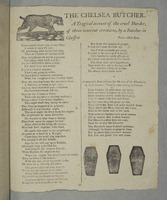 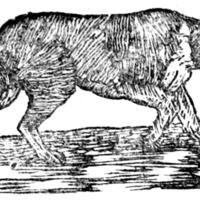 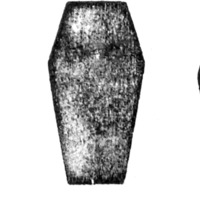