Erin go brah : together with St. Patrick's day in the morning

Though it was written by Thomas Campbell, a Scot, “Erin Go Brah” (in English, “Ireland forever”) is still preserved among traditional singers in Ireland, a sad paean to their downtrodden country and the masses forced to leave their homeland. According to a note in Nightingale, “this ballad is supposed to have been written during the late disturbances in that country,” and refers to a “poor and delicate youth, Anthony McCann, exiled for being implicated in the Irish Rebellion of 1798. Campbell met him at Hamburg in 1800” (Larkin 163). Campbell’s own recollection of the song is that “it was in consequence of meeting [McGann] one evening on the banks of the Elbe, lonely and pensive at the thoughts of his situation, that I wrote ‘The Exile of Erin’” (Robertson 241). The song was first published on January 28, 1801. Evidently hitting a local nerve, the text was published in the New Hampshire Sentinel on January 5, 1803, and the Salem Register the next day. An amusing parody on this text appeared in the Columbian Phenix on July 16, 1808. In it a recent Irish emigré meets his relation in a bar in New York. The verse continues to call for the Irish to be

United like brothers,
God grant them long life for to plant all their seed.
May their great generation like vines of potatoes
Spread over this land like New-Jersey musquetoes,
To sting all the British that dare to invade us,
and wield the shelalee of Erin go brah. (verse 3)

“St. Patrick’s Day in the Morning,” a song about a party on St. Patrick’s Day, has many attributes of “Irishness,” such as Irish names, foods, whiskey, and green shamrocks, but it too may have been written by a Scot. The title tune first came to light in James Oswald’s Caledonian Pocket Companion. Oswald had started his career as a dancing master and fiddler in lowland Scotland, and had turned to arranging old tunes, composing new “Scots” tunes, and publishing his beautifully engraved collections as a more lucrative occupation. He moved from Edinburgh to London and had a successful business there from 1741 to about 1762. The impact of his publications was far reaching. His hand edited the first printing of many tunes and airs that became very popular in the second half of the eighteenth century and well beyond. He found a good market for short melodic “recital” pieces in a Scots folk style and composed a number of these using Italian techniques of variation and tempo changes. Some of his material was old, some was new; much of it cannot be found in print before his time.

“St. Patrick’s Day” is one of these. As first published in Oswald’s Caledonian Pocket Companion, it is a two-part piece starting with a melody in duple time having much in common with “Flowers of Edinburgh.” Then comes a section in 6/8 marked “Brisk.” This is the familiar “St. Patrick’s Day” tune but with two strains of eight bars (AABB) rather than the 8/6 (AABA) usually played today. This jig tune immediately appeared alone on the first page of Rutherford’s Compleat Collection of 200 of the Most Celebrated Country Dances (1756), suggesting that it was a newly popular title that would help sell the book.

Thomas Arne used the melody in Love in a Village (1762) for the aria “A Plague of These Wenches” but he had to alter the tune, shortening the second strain to fit his lyrics. Both versions persisted into tradition, but it is Arne’s shortened version to which the broadside text beginning “Ye lads and ye lasses” was set in the 1770s. The second verse (of three) is omitted on the broadside and the present second verse is given without line 6, which should read “We will jovial, jovial be.”

There came to the beach a poor exile of Erin.
Ye lads and ye lasses so buxom and clever. 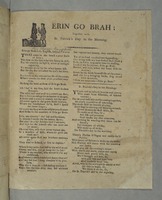 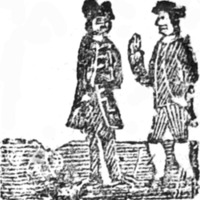 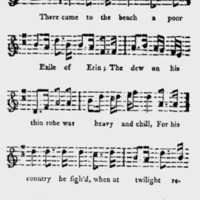 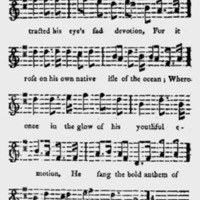 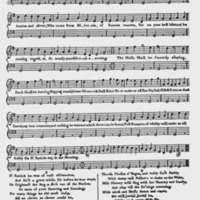