The soldier's return -- a love song

This song by Robert Burns was written in 1793 to the tune of “The Mill, Mill O” (see The Green Mountain Boys Adieu). Here the soldier returns and is initially not recognized by his faithful love as he speaks to her “with alter’d voice.” Coverly changed the third and fourth lines from Burns’s original, which read, “Wi’ mony a sweet babe fatherless, and mony a widow mourning.”

The song appeared in sheet music editions and slip ballads, appearing in twenty songsters between 1806 and 1820, as well as the many collected editions of Burns’s songs over the years (Wolfe, Secular Music #7116, #8430-35, #8437; R. Keller; Roud). Coverly printed another edition of this same song with the same cut, but with a spelling error in the title: The Sodier’s Return. When he set the text for the Thomas collection copy, a number of small abnormalities in the typesetting suggests that his press was operating on a shoestring. He evidently had most of his letters I, T, and lowercase y tied up and had to use italic versions of those letters in the text as well as a tiny S and a smaller O in the title. 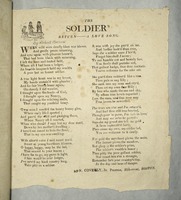 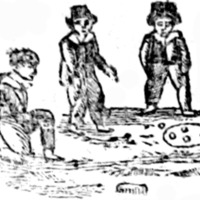 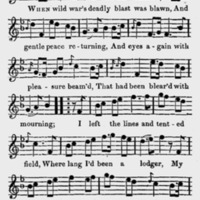