American taxation: a song of seventy-nine

While parts of this song might have been written in the 1760s when taxation was the major issue, this version of the text probably dates from 1779, as the subtitle suggests. It is a patriotic lyric created to pump up nationalism, and Coverly found a ready market for it, issuing a number of editions from the Milk Street shop. Several earlier editions from other printers had more detailed sub-titles. An issue from ca. 1798, when the XYZ affair strained relations with France, includes the following:

This song was written when the trump of war sounded loud thro’ this happy land, during the Revolutionary War, and although peculiarly applicable to those times, it cannot but be received with approbation by those venerable patriots who achieved that revolution—and by all their brave descendants who now inhabit this free country—but let it be distinctly understood and remembered, that as we fought and conquered when Britain endeavored to enslave us, we will never consent to be enslaved by France, nor give up our free trade and commerce to any set of men. We were born free, and will never die slaves.

The following is among the many national songs which were composed during the revolutionary struggle of the American Patriots, for the laudable purpose of keeping alive the spirit of resistance, and to add nerves to the despondent. The native ingenuity which characterizes the biting sarcasms contained in this production, on the unjust, oppressive, and ignominious conduct of the then British administration, has rarely, if ever, been excelled. “What a pity ’tis,” as Uncle Toby would exclaim, that some bard should not, at this time, “uplift him from the lazy down,” and endeavor to do like justice to the conduct of our present administration. The conduct of the British government in 1774, as nearly resembles the policy of our present rulers, as the characters of the two governments will admit. They oppressed their own subjects—our government destroys the effects of the labor of our own citizens.

The language of the text is straightforward, perhaps by a literate author with command over strong verbal imagery and knowledge of the history of the dispute with Britain.[1] However, Harold W. Thompson points out that the author’s history is not always correct, as Burgoyne was never “in fetters” and the victory at Brandywine went to the British (102).

This stable text seems to have traveled chiefly on broadsides, with a few verses added and subtracted from printing to printing. It appeared in the Stevens-Douglass manuscript (44) and in the Forget Me Not songsters of 1835 and 1850 (55-62), and in two songsters, in 1811 and 1816 (R. Keller). When Lowell, Massachusetts, factory worker Miriam R. Green Kimball wrote the reminiscences of her childhood in the 1820s, she told a story about Uncle Peter, an aged resident of her native New Hampshire village. He had served in the Revolutionary War from Lexington to the disbanding of the army in 1783 and his dramatic performances awed his listeners.

The evening . . . [was] generally concluded by Uncle Peter’s singing that capital song, the “American Taxation”. . . . In the performance of this, Uncle Peter seemed to be the very incarnation of music, sent down from the upper regions to bless the beings of earth. When he came to that part of the song where the “subtle arch combiners addressed the British court” [line 29] with regard to the wealth and splendor of Columbia’s matchless clime, his eyes would kindle up with a patriotic and exultant pride. . . . Like a true poet, he always increased in vigor as he advanced, and when he got to that part of the song where the Americans rise in the strength of their might to repel the invasion, he would rise involuntarily from his seat, raise both hands, his eyes dilated with enthusiasm, and thus increasing in spirit till he had finished it, when he would sink back into his chair, as if over come with the electrifying effect of his own singing. (Lowell Offering 82-86)

This description is particularly interesting in that collectors of folk songs in the twentieth century usually note that their informants do not react to their texts. Here the performer’s emotional response may be because he had been part of the action he was singing about.

The last line of each verse ends with “in North America,” echoing the burden of a widely sung local lyric beginning “That seat of science, Athens, and earth’s proud mistress, Rome . . . oppose, oppose, oppose, oppose, for North America.” The title was “A Song on Liberty, Made by a Bostonian, to the Tune of the British Grenadiers.” ([Williamsburg] Virginia Gazette, January 6, 1774).  “American Taxation” was probably also sung to “The British Grenadiers.”[2] This rousing British patriotic song appeared in print in the early 1750s, set to the descendent of an earlier tune called “All You That Love Good Fellows” (Simpson 15). The tune quickly became widely known in Britain and America, a staple as a march and a melody for topical song lyrics.

While I rehearse my story, Americans give ear. 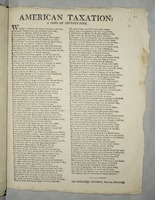 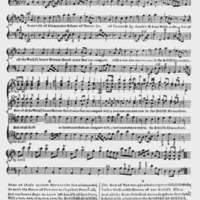