Thomas Truxtun’s victory over L’Insurgente in 1799 was celebrated in several songs that described the action, two of them in the Thomas collection (see also Truxton’s Victory). Curiously, these songs, which appeared in two songsters between 1814 and 1815, all spell his name “Truxton” (R. Keller). A third text was released in sheet music form—a song by Susannah Rowson to the tune of “Hearts of Oak.” The Rowson song also echoes the phrase “conquer or die,” which the author of this broadside text suggests Truxtun said to his men as the ships engaged.

Thomas Truxtun (1755-1822) was born near Hempstead, Long Island, and went to sea at the age of twelve in the London merchant trade. By the age of twenty he was captain of his own ship. He entered the privateer service and came out of the Revolutionary War with a considerable reputation. Settling in Philadelphia, he helped with the building of Constellation and sailed on her first cruise in 1798 as captain. It was on this cruise that he met and defeated L’Insurgente, the incident described on this broadside.

The author of this text seems to have been an eyewitness or had access to someone who was, for he displays considerable accuracy of detail, insofar as we know it today (Martin, letter). And he wrote very soon after the event, because the last verse certainly suggests that Washington, who died in December 1799, is still alive.

This variant copy includes a verse that is not in the Thomas exemplar, a verse that is needed to explain why the ship “pursu’d the chase.” In verse 5 L’Insurgente responded to the orange and blue signal flags (verse 4) by retreating.

They answer’d our signals by quickly turning tail,
The sansculottes affrighted, prepared a press of sail,
While our Commander Charley cries
That ship this day must be a prize
To brave Yankee boys.

The battle between Constellation (38 guns, Captain Thomas Truxtun) and L’Insurgente (40 guns, Captain Michel Pierre Barreaut) was the first frigate action of the new United States Navy. Fought in early 1799, it pitted a very heavily armed American bent on victory against a more lightly armed Frenchman whose orders inclined him to seek to avoid battle.

When contact was made, about noon on February ninth some fifteen miles east northeast of Nevis Island in the Lesser Antilles, Truxtun immediately went in chase. After about two hours, the two ships were struck by a sudden squall. The larger American withstood it with but the loss of a studding sail boom, but the Frenchman had his main topmast carried away, and so was partially crippled. Closing rapidly to windward, Truxtun realized that the continued high wind would cause him trouble firing his guns to leeward, and so gave up the usually preferred position to swing across the Frenchman’s stem and attack him from leeward with his guns clear of the sea.

At three-fifteen, Constellation’s opening broadside, aimed low, was devastating. L’Insurgente’s hull was badly battered and dozens of Frenchmen were struck. In accordance with French practice, the return fire was aimed high to wreck sails and rigging and render their foe immobile, and, while damaging, was not crippling. Truxtun retained the maneuvering advantage, even twice raking his opponent from ahead, before Barreaut finally hauled down his colors about an hour after the first shot. French dead and wounded numbered seventy; Americans, five (none dead, one mortally wounded, and one executed for attempting to desert his gun).

Truxtun sailed his wounded ship and his prize to St. Kitts, where he arranged with the British governor to confine his French POWs until an exchange could be arranged. Upon his return to the United States with the two ships, Thomas Truxtun became the first officer of the new Navy to be awarded a gold medal. In February 1800, he fought another French frigate, Le Vengeance, in a vicious engagement that left both combatants adrift and unable to continue the fight. Because his opponent was larger, and because he brought his ship home, Truxtun was again considered the victor by his fellow Americans. In the meantime, his earlier conquest had been taken into the Navy as the Insurgent, but was lost with all hands in a hurricane in September 1800.

The language is in the popular idiom—rhymes are approximate and descriptions are direct and vivid. The poem is in a very specific structure with lines of 13, 13, 8, 8, 8, 5 syllables and a burden “brave Yankee Boys.” We have not located any music with this burden. “British Tars” is the indicated tune for the text as it appears in the Federal Songster (27-29). There are several English song sheets with this title, but they do not scan with these lyrics (R. Keller; Schnapper 1114).

Come all you Yankee sailors with swords and pikes advance. 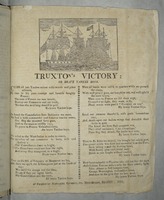 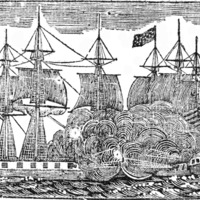