A Song composed in the year seventy five Transfer'd to 1812. "Tune the World turned upside down."

Click below to hear selected verses performed by David Hildebrand.

“A Song Composed in the Year Seventy Five” on this unique broadside is a composite parody of two different songs of the Revolutionary era, one British from 1766, the other American from 1776. The first four lines are from the first stanza of “America Triumphant; or, Old England’s Downfall.” This text was first printed in London in 1766 with an additional line, “To the Tune of There was a jovial Beggar.”[1] It is a light satirical piece suggesting that smart Englishmen will go to America, the land of milk and honey where “paper goes for money, and taxes they won’t pay.” It has none of the ferocity and posturing of the rest of the song on this broadside. For the music, see The Soldier’s Life.

The remainder of the text is a close parody of a song called “War and Washington,” written in 1776 by Jonathan Mitchell Sewall (1748-1808) and lauding Washington as the inspiration to victory (Massachusetts Spy, February 2, 1776; Sewall’s Miscellaneous Poems 52-53; see also General Burgoyne’s Lamentation and Hail Columbia). Sewall’s model for the original text was the boastful patriotic song, “The British Grenadiers” (see American Taxation). He adapted verses 2 through 4, 9 and 10, and half of verse 8 directly. In this new, fire-eating, pro-war text Sewall does not deal with any of the war hawk issues—conquest of Canada, impressment, free trade—that led to the conflict with England, except the Indian dangers noted in verse 7. He substituted Major General Henry Dearborn (1751-1829), commander of the largest force of Americans under arms, for Washington (Morris 142).

At first glance the indicated tune, “World Turn’d Upside Down,” seems to be a link in the currently popular but unsubstantiated story that the British drums beatthe cadence of a march of that title during the surrender at Yorktown in 1781. That story first appeared in 1828, was mostly ignored in the nineteenth century, was repeated without questioning in a few otherwise reliable history books between the 1890s and 1940s, and was widely accepted, still without critical examination, from then on.[2]

While there is no period documentation for British drums playing this tune, the phrase “the world turn’d upside down,” from the Bible (Acts 17:6) appeared with songs and in literature from the seventeenth century on, particularly associated with children’s stories of nonsense role reversals and topsy-turvy things. John D. M’Dougall advertised books for children in Boston in 1780, including The World Turned Upside Down; or, The Commical [sic] Metamorphoses: A Work Entirely Calculated to Excite Laughter in Grown Persons, and Promote Morality in Youth of Both Sexes—Decorated with 34 Curious Copperplates (Boston Independent Chronicle, November 30, 1780). This widely published little garland was probably familiar to most Americans of the time. At the beginning of the war a grown-up poem on the phrase appeared in a Connecticut newspaper.

The World’s turn’d up-side down throughout the Nation,
No Mortal is contented with his Station;
Dull Citizens to vie with Nobles strive,
Gentry take Whip in Hand, and Coaches drive:
The Footman apes the Manners of his Master,
And every Scribbler turns Poetaster. (Norwich Packet, July 15, 1776)

Thus it may have been the concept of the phrase that Major William Jackson had in mind when, forty-one years later, he invented the dialogue reporting on the Yorktown negotiations. He was in France at the time of the surrender and was describing events in which he had not participated (Garden 17-18). Although he presents supposed conversations complete with quotation marks and descriptive vocal expressions (“‘Yes, Sir,’ replied Colonel L[aurens], with some sang froid”), his remarks do not reproduce accurately the surrender article dealing with music that is supposed to be the crux of his discussion. None of the many eyewitness reports of the surrender ceremonies mention any specific tune played by the British drums or fifes. The Americans, of course, played “Yankee Doodle,” which was reported in all the newspapers but not mentioned by Jackson (Corry).

Whether they beat the tune or not—and there was no such drumbeat in either British or American musical literature—a melody by this name was circulating in America at the time. Nathaniel Brown, an American drum major stationed near West Point, included a tune of this name in his handwritten collection of music begun in 1781. Brown was not at Yorktown, but several units who were at the surrender returned to West Point afterward. Several decades later, three lyrics, the text on this broadside; another in the Thomas collection, The World Turn’d Upside Down; and a fiery evangelical hymn, were written to the tune of “The World Turned Upside Down.”[3] These texts all fit Brown’s melody. Whether the author of the text on this particular broadside was making a point by changing the song’s original tune from “The British Grenadiers” to “The World Turned Upside Down” is not clear.

[1] It appeared on an American broadside as “A Song. America Triumphant; or, Old England’s Downfall” (1775), Rosenbach Foundation copy. The tune is better known as “A Begging We Will Go”; see The Soldier’s Life.

[2] After quoting Stephen Gould: “We regularly construct myths when we do not have data,” Arthur Schrader discusses the problems raised by this citation in “‘World Turned’” 180-215.

[3] In 1815, a Presbyterian minister in Ballston, New York, was preaching a sermon warning his flock against the “false prophets” among them. When the service was over, Jabez King of Woodstock, Vermont, rose up and began to sing a song beginning “When Paul went to Ephesus, he preached to them Jesus,” with a dramatic text by Christopher W. Martin, who, like King, was a preacher of the evangelical sect, Christian Connection. King was repeatedly interrupted and cried down, but he sang anyway. A full report of the incident appeared in the sect’s newspaper with all eight verses of the text and the indicated tune, “The World Turned Upside Down.”

When Paul went to Ephesus,
He Preached to them Jesus,
Who died to redeem us,
From an Indignant frown:
They knowing not the stranger,
Once cradled in a manger,
Cry’d out our crafts in danger,
They turn the world upside down. (Herald of Gospel Liberty, June 23, 1815)

The author attribution was printed with the text in Cram 21-23, and with the tune indication, “World turned upside down,” the text appeared in Plummer 23-24. The text also appears in a manuscript made at about the same time by Robinson C. Ross, who with Cram and Plummer was also of the Christian Connection sect. Here the text is titled “Hymn 101, P.M.” and includes the headnote from the Bible that was in Cram’s book, “These that have turned the world upside down are come hither also. Acts. XVII.6.” I thank Richard Hulan for bringing the Ross manuscript to my attention, and for the citations to Martin, Cram, and Plummer. See also Joyce 253-54. 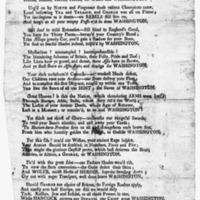 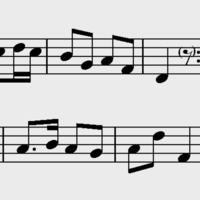