A dramatic description of the earthquakes of this broadside was published in the Worcester Sunday Telegram in 1980.

Chandeliers shook in Charleston, S.C. Clocks stopped. Church bells rang. Windows rattled in Washington, D.C. Dishes clattered in Boston. The earth trembled in Detroit and New Orleans. Back in the boot heel of Missouri, the ground rose and fell in earth waves. Houses cracked. Chimneys toppled. Forests were flattened. The mighty Mississippi briefly reversed course. The culprit was an often forgotten series of earthquakes that struck the New Madrid, Mo., area in 1811-12 and sent shock tremors over more than a million miles of the continental United States. No other earthquake in US history affected so extensive an area. (Aschenbach)

Coverly copied an article about the earthquake from an unidentified newspaper with the byline: “Charleston, (S.C.) Feb 7, 1812.” On the eighth, the Charleston Courier carried a similar piece with additional details:

Another Earthquake! The inhabitants of this city were again alarmed yesterday morning by a severe concussion of the earth. It commenced at seven minutes before 4 o’clock, and the undulation continued until the clock chimed the hour. The vibration was not regular, but appeared to be in strong and sudden jerks. The motion was E. and W. It was accompanied with a noise like distant thunder—During the preceding part of the night, the sea on the bar roared unusually loud. The air was cold and the sky gloomy and overcast. The frequent repetition of this awful visitation has excited the utmost anxiety in the minds of our citizens. This is the tenth distinct shock which we have felt in this city since the 16th December last, and was stronger than any that had preceded it. Shocks of Earthquakes were felt last month as far North as Salem.

This earthquake was the third and most violent of a series rated among the strongest in United States history. It was rated at 8.7 on the Richter scale, roughly equal to the 1906 quake in San Francisco (Johnston 55-68).

The author of the verses that follow this report minces no words. In this event God has spoken. “Men, women, children, fill’d with dread affright, / transfix’d with horror, view the awful sight. / Some think the day of general doom is near.” He compares the earthquake to the day of the last judgment when God will “set the world on fire.” Those without sin will rise to happiness “forever blest.” The rest will “writhe in tortures of eternal woe.” This poem was probably not intended to be sung. The first two verses are a prayer to God, but the prayer soon melts into dramatic images of natural disasters sent at God’s behest. Only in the last two lines does the poet address his reader directly. Time is of the essence. In only a “few short years . . . prepare, O! Man, to meet an injur’d God.”

Eternal Power, who reigns in heaven above. 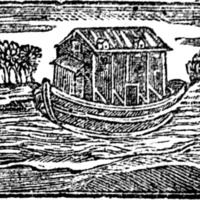 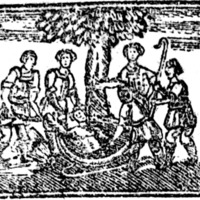