The Sea captain, or Tit for tat

This English tale of double cuckolding appears in at least two guises, here as “The Sea Captain” and in a Fordyce slip ballad in the Madden Collection as “The Squire and the Farmer” (16:132; Roud #12545). Coverly printed the song on two separate broadsides, one undated and this one dated August 28, 1811. This very specific dating is unusual for Coverly. Did the song have a particular relevance to rumors about town?

The phrase “Tit for Tat” appears twice in the narrative and as the subtitle or title on many versions. Another alternate title, now at the British Library, was “The Merry Wives of Wapping,” a reference to the section of London where seamen found lodgings and ships were outfitted. Thomas Nixon of Framingham, Massachusetts, wrote out “Tit for Tat” in the 1780s from a different source than Coverly’s, as his sailor was known as Jack Hanson and the wife was “Charming Molly,” both closer to the British version. The songs Nixon collected were from the streets and in his version of this text he replaced several intimate terms with vulgar words that Coverly would not have printed (24-29).[1]

As for the tune, there are several possibilities but no real matches. A tune called “Tit for Tat” was well known in England and America from 1750-1810, but it is in 6/8 rhythm and does not flow with this text. A Madden slip ballad edition has a refrain “With a fal, la, &c.” after the first and tenth verses but this burden is too common to provide a clue to a tune (3:745; Simpson 650-51). This leaves only a clue from the final line of the comic narrative, “So we are but cuckolds boys all in a row,” that could be a reference to a seventeenth-century tune, “Cuckolds all a Row,” that King Charles II asked to be played in 1662 (Pepys, December 31, 1662). However, this tune had little currency after 1700 and has feminine cadences lacking in the broadside text.

Come all you who delight in frolicsome songs. 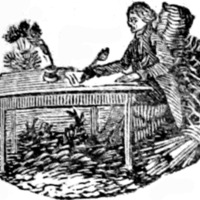