Rogers and Bingham. A song, written and sung at the celebration in Charleston, S.C. July 4th, 1811

Commander Martin describes the incidents that led to the song, “Rogers and Bingham”:

On June 22, 1807, HMS Leopard (50 guns) hailed USS Chesapeake (36 guns) as she departed Chesapeake Bay. Sending an officer on board, the British commander demanded the delivery of four men known to be on board who were British deserters. When [American] Commodore James Barron refused, the Briton fired into the unsuspecting and unready American [ship], killing three and wounding 18. Barron hauled down his flag and attempted to surrender, but the British captain refused his sword. Nonetheless, he did find and remove the four men he wanted. The outcry when the details of the incident became known very nearly led to war.

Nearly four years later, on May 16, 1811, USS President (44 guns, Commodore John Rodgers) met HMS Lille (not “Little”) Belt (20 guns, Captain Arthur Batt Bingham) somewhat to eastward of the site of the earlier incident. Each knew the other side was a man-of-war, and the Briton knew the other was an American. When the British sloop-of-war turned away, Rodgers took his frigate in pursuit in order to identify this unknown warship near American waters. Twilight became night before the two were close together and repeated unanswered hails were exchanged. Then, someone fired a gun. Two short fire fights ensued, separated by a pause of a few minutes. It was at this point that the stranger identified himself as being British. Rodgers quickly repairing the little bit of damage his big ship had suffered, remained near the Briton until morning, when he offered assistance in restoring some of the damage he had done. The offer was denied and the two parted.

Once again, diplomacy narrowly averted war, but to the American public, the shame of the 1807 incident had been avenged, and so enthusiastic if inaccurate recollections of the incident were sung across the land” (Guttridge and Smith; Paullin; Charleston Courier, July 9, 1811).

In the last verse this pro-American song suggests that the British Captain Bingham learned his lesson to “look more sharp for privateers.” The song was written “by a gentleman” of Charleston for the Palmetto Society’s celebration in 1811 of the thirty-fifth anniversary of the Battle of Sullivan’s Island on June 28, 1776.[1]

Unlike The Embargo that uses the text of “Yankee Doodle” as a store of ideas, this song was simply set to the “Yankee Doodle” tune as a jaunty, anti-British statement (see The Yankees Return from Camp). Coverly’s typesetter padded out the ten-verse song by repeating the chorus every time, realizing that the sheet should look full in order to sell.

[1] The song appeared in the Easton (MD) Republican Star on July 30, 1811, with an explanatory preface and credited to the Charleston City Gazette. Our thanks to Nicholas Butler, archivist at the South Carolina Historical Society, for assisting in the search for the source of the song.

Once Bingham took the Little Belt. 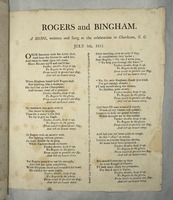