Naval victory, by the United States frigate Constitution, and the British frigate Java

This song, “Naval Victory,” as well as those on the broadsides Glorious Naval Victory and Bainbridge’s Victory, laud the victory of Constitution over Java. Already famous for having taken Guerriere, Constitution’s new victory added more laurels to the proud ship that survived for two hundred years and is now on exhibit in Boston Harbor.

Naval Victory is another song with the “my brave Yankee boys” burden (see Truxton’s Victory and Madison’s Victory). It is similar in expression to Truxton’s Victory, using some of the same phrases, for instance, the graphic “Her scuppers ran with British blood / As if it was a purple flood” is reminiscent of “. . . that drench’d their decks in gore / The blood did from their scuppers run.”

Commander Martin reviews the history of Constitution after her engagement with Guerriere.

“When Captain Isaac Hull returned to Boston at the end of August 1812, he learned that a brother had died in New York, leaving a widow and children. He requested and received detachment from Constitution to take care of them. In his stead as captain of the frigate was ordered William Bainbridge, an officer of poor repute but with powerful friends.

“Bainbridge had been the first USN officer to have to surrender his command to an enemy, this during the Quasi-War with France. Exonerated from any failure of duty, he was given command of a light frigate in which he soon was party to an embarrassing diplomatic gaffe. Again held blameless, he then was placed in command of the frigate Philadelphia in which, as discussed earlier, he rashly sailed into shoal Tripolitan waters, went aground, and lost his ship to the pirates. Yet a third time, a rationale was found to absolve him. He was, to put it bluntly, a three-time loser.

“When Bainbridge took command of Constitution in September 1812, a number in the crew voiced their dissatisfaction and were punished for their temerity. Sailing in October, Bainbridge worked his way across the Atlantic and then southward until he was off the coast of Brazil. There, he encountered HMS Java, like Guerriere, a former French frigate. In a battle lasting about three hours, he defeated his faster foe despite having had his ship’s wheel shot away and having been twice wounded himself. It was, in most respects, a masterly performance, displaying far more tactical skill than Isaac Hull had, and in some measure redeeming Bainbridge’s professional reputation.

“Naval Victory, since it speaks of ‘twenty-five were wounded, whose lives we hope to save,’ may have been written by a crew member in the days immediately following the December 29, 1812, battle, for by the time they returned to Boston several of the wounded had succumbed. British casualties, killed and wounded, numbered somewhere between 120 and 230 of the more than 400 souls on board.

“In his second broadside effort [describing the same battle, Glorious Naval Victory], James Campbell is quite accurate in his description of events up to through the initial maneuvering. He then leaps ahead to the moment when Java has only one mast remaining. It probably was a wise decision, for the intervening maneuvering was both complex and repetitive, and it also avoided having to mention any adverse occurrences, of which there were three. Bainbridge, as noted earlier, was wounded twice in the same leg fairly early on in the action. The third misfortune—and embarrassment—was that Java’s captain, Henry Lambert, surprised Bainbridge by a sudden maneuver that allowed him to rake his American foe from astern (verse 8). This was how her wheel came to be shot away. (Bainbridge himself carefully obfuscated the raking in his battle report to the Secretary of the Navy.) Campbell himself was detached from Constitution some time after her return to Boston in mid-February 1813. He may have been among the 150 men sent from Constitution to Commodore Isaac Chauncey on Lake Ontario during the spring of that year.

“William Bainbridge seems to have taken little comfort from the medal awarded him by the Congress, or the $50,000 provided to share with his crew. Instead, he spent much of his remaining career harassing those of his fellow officers who had gained prominence while he was a prisoner of the Tripolines a decade earlier. In 1814, he sought unsuccessfully to get Charles Stewart court-martialed. His behind-the-scenes manipulations led to Stephen Decatur’s death in a duel with James Barron in 1820. And a few years after that, he had charges brought against Isaac Hull for malfeasance in office while commandant of the Boston Navy Yard, but the court-martial acquitted Hull. His malevolence notwithstanding, Bainbridge’s victory over Java has resulted in his name being carried by four USN ships” (Long; Martin, Most Fortunate Ship).

Come all ye hardy sailors, and join me in my song. 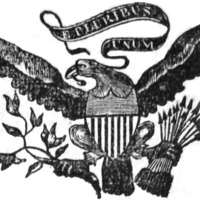