Hull's victory, or, Huzza for the Constitution

The first major naval victory of the War of 1812 occurred on August 19, 1812, when Constitution, commanded by Isaac Hull (1773-1843), spectacularly vanquished the British frigate Guerriere in the battle that won his ship the name of “Old Ironsides.”[1] In announcing the victory, the Boston Independent Chronicle foretold America’s rapturous response: “This brilliant exploit will excite the liveliest emotions in every American bosom” (August 31, 1812). Hull’s victory and the succeeding naval triumphs during the remainder of 1812 and early 1813 indeed triggered deliriously live emotions in many Americans, notably in those belonging to balladeers and songwriters.[2] In the words of Vera Brodsky Lawrence, “floods of naval songs were published in broadside and sheet music form; the newspapers were drenched with them, and the theaters presented them embellished with dramatic trappings. It would be difficult to estimate just how many different songs were called “Constitution and Guerriere” (194). And it is almost expected that the indicated tune for this ballad would be “Paul Jones’s Victory,” as the earliest edition states.

Commander Martin studied the four songs in this collection that relate to this battle and explains the source of some of the broadside authors’ information:

The War of 1812 was an unpopular war, particularly in Captain Isaac Hull’s home region of New England. Although it was fought under the slogan ‘Free Trade and Sailors’ Rights,’ the truth is that most mercantile houses were against it because it disrupted their lucrative trade with England and France. Too, there was the belief that the minuscule US Navy could do little against the might of a Royal Navy honed by nearly twenty years of combat.

On August 19, 1812, just over two months after the declaration of war, USS Constitution (44 guns, under Captain Hull) met HMS Guerriere (38 guns, under Captain Richard Dacres Jr.) some six hundred miles east of Boston. The American closed slowly, making preparations to fight, and, once the Briton opened fire at long range, began yawing back and forth at each broadside to throw off British aim. After the passage of a half-hour or so, Dacres grew impatient and turned downwind, a maneuver understood to invite closure and serious combat.

Hull accepted the invitation and closed in on Guerriere’s starboard side. At a range of less than a hundred yards, and with double-shotted guns, he opened fire. In about twenty minutes, Guerriere’s mizzen mast was shot away and fell in a dragging tangle between the two ships. This caused Guerriere to skew to the right, and before Hull could react, she rammed Constitution in the larboard mizzen chains and hung up, repeatedly striking Hull’s ship as her forward motion caused the Briton to swing aft. Both Hull’s larboard quarter boat and gig were smashed in the process before the two ships separated.

After making a few rigging repairs, Hull then took up a position on a drifting Guerriere’s larboard bow and poured in at least two broadsides, one effect of which was to shoot two gun ports near her bow into a single gaping hole. Seeing his foe still encumbered by the fallen mizzen mast, the American captain maneuvered to gain a position across Dacres’s bow, from which position he would rake him. But something occurred which caused the plan to miscarry, and Guerriere again collided with Constitution, this time getting caught in the latter’s starboard mizzen rigging. Both sides attempted unsuccessfully to board, and during these attempts Hull’s Marine officer, Lieutenant William Sharp Bush, was shot dead (the first USMC officer to die in combat), and his First Lieutenant, Charles Morris, seriously wounded in the abdomen. When the ships broke apart, the resulting shock through Guerriere’s fore stays caused her wounded foremast to give way, and it, in turn, brought down the wounded main mast. Completely without motive power, Dacres surrendered. From first shot to last, the engagement had occupied about two-and-a-half hours. After a night of trying to keep his prize afloat, on the morning of August 20 Hull ordered her scuttled and headed for Boston.

On his arrival in Boston’s President Roads on August 31, Captain Hull set about preparing his report of the battle. The first version ran about fifteen hundred words, but apparently said more than Hull wished to. His second effort was about half as long and was a model of inference and obfuscation. In sum, it left a reader with the impression that in just thirty-five minutes he had swooped in and reduced Guerriere to rubble. Yankee Doodle triumphs over the hated George III. No mention of the slow, cautious approach or the two collisions. No mention of the fact that Constitution was the larger, more heavily armed combatant. The little US Navy had humbled the omnipresent Royal Navy.

Hull sought glory and he certainly got it. The Congress voted a gold medal for him and silver copies for his commissioned officers; the entire crew shared $50,000 in prize money for Guerriere’s destruction. The inebriate Secretary of the Navy was only too happy to publish Hull’s modest second report, and this became the basis for most descriptions of the battle for nearly the next two centuries, including all the broadsides published here.

In Hull’s Victory [here and in a second copy], the writer dates the battle to August 20, not the 19th. This indicates that he was privy to the ship’s log, for at that time such records were kept from noon to noon and bore the date of the ending meridian; thus, events occurring after noon on August 19 were recorded early in the log dated ‘20 August.’ He also says ‘We rak’d ’em so clean,’ ignoring the fact that the ships then were snagged together, and later says ‘In twenty-five minutes the business was done,’ improving on Hull’s implied half hour.

Captain Hull’s Victory likewise dates the battle to August 20 but adds (correctly) that the Briton hoisted three ensigns. The subsequent exchange of hails is completely fictitious. Curiously, the length of the battle is given as ‘forty minutes.’ The statement of British casualties is essentially correct, as is the appended statement of American losses.

‘Boatswain’s Mate’ James Campbell, author of A New Song, had been transferred to Constitution from Gunboat 81 on August 2, 1812, during the ship’s brief call at Boston just prior to the battle. On the climactic day, he served as 1st Captain of #13 Long Gun (24-pounder), which placed him immediately forward of the captain’s cabin on the gun deck. His view of events was extremely limited, the gun port being largely filled by the cannon’s muzzle and his station being in the area at the gun’s rear. Like everyone else, he used Hull’s implied thirty minutes figure for the fight’s duration. Interestingly, he reports that Guerriere actually was looking for Constitution’s sister, President, which, in fact, had been the case until just days before the battle when the Briton had been detached from that duty to proceed to Halifax for repairs. This infers that Campbell almost certainly talked to some of the British prisoners on board during the trip to Boston after the fight. He also mentions ‘a hogshead of switchel’ being seen on board the Briton, which is confirmed by an American officer, and implies that Campbell may have been a member of the original boarding party after Guerriere’s surrender.

The author of American Constitution Frigate’s Engagement references an incident earlier in July 1812 when Constitution met and was chased unsuccessfully for nearly three days by a British squadron off New Jersey. Guerriere had been one of the Britons involved. Yet again, the broadside writer brags that ‘In half an hour the job was done.’ Clearly, Isaac Hull was a master propagandist. His brief report provided the basis for all the glory he could wish. In addition to the honors and rewards already mentioned, cities and organizations competed to do him honor, with the presentation of swords, services of plate, and other rich tokens of their esteem. Latter-day authors repeated his version of the battle almost without question for 170 years. The US Navy has perpetuated his memory and service in the names of five men-of-war. And it is from this time that his ship began to be called ‘Old Ironsides.’ (Maloney; Martin, “Isaac Hull’s Victory”; Martin, Most Fortunate Ship)

[2] See The Victories of Hull. A rollicking fiddle tune named “Hull’s Victory” also capitalized on the event and has remained in the repertory of New England fiddlers to this day; the text appeared in eleven songsters between 1813 and 1818 (R. Keller, Early American Secular Music and Its European Sources).

Ye true sons of freedom, give ear to my song. 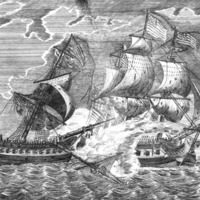