The Green Mountain boys adieu. On leaving the encampment at Burlington, September, 1813 ... "Tune the Soldier's farewell"

Ethan Allen (1738-89), a charismatic commander born in Litchfield, Connecticut, was the leader of the Green Mountain Boys, a citizen’s militia group founded in Bennington in 1770, long before Vermont was a political entity. The territory was claimed by both New Hampshire and New York, and the purpose of the group was to defend lands acquired through grants sold by Governor Wentworth of New Hampshire against the claims of New Yorkers who were also sold land in the area. Allen died in 1789 in Burlington but the group continued to exist.

The headnote on this text indicates that it was written as preparations for a second attack on Montreal were being made. The Green Mountain Boys were to be part of the force. The expedition gathered in Sackett’s Harbor and headed north in September and October 1813. After a skirmish with a British force on October 25 (Battle of the Chateaugay), the drive on Montreal was abandoned.

A song published in 1812 entitled “The Soldier’s Farewell,” beginning “Since sounding drums and rising war” was set to the same tune as Robert Burns’s “When Wild War’s Deadly Blast,” usually called “The Mill, Mill O” (see The Soldier’s Return; Minstrel 171-72). With a similar opening line, it may indicate the tune intended for this text. 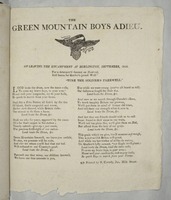 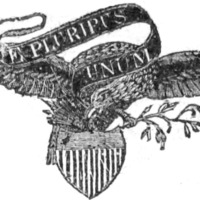