The Yankees return from camp

In 1959 S. Foster Damon suggested that the song now called “Yankee Doodle” is unique among the patriotic songs of the world in that it makes fun of the very people it celebrates.[1] He concluded that the comic text was American in origin. In a lengthy article in 1976, J. A. Leo Lemay agreed with Damon, pointing out the earlier songs that were drawn on for the “Father and I” text (435-64). The most coherent copy of these early lyrics is in a retrospective broadside published around 1814, probably in Vermont. Note that here the chorus is not “Yankee doodle, keep it up.”

Another early text is found on a broadside probably published in 1759 or 1760 entitled The Recruiting Officer, Together with Yanky Doodle. Here the text, which also refers to action against the French in Canada, reflects several elements of the same text, but has an unexpected chorus: “Yanky doodle, doodle, yanky doodle dydie.” This is not in the same meter as the later “Father and I” chorus, but the germs of the combination are there.

Dr. Lemay outlines the storylines in the Yankee song text, calling them remnants of three folk songs probably current in New England in the mid-eighteenth century.

Verses 1 and 2 relate to the colonial militia who fought the French at Cape Breton in 1745, a successful campaign of which the colonists were very proud. Lemay concludes that these verses were written by a New Englander to burlesque the English attitudes toward the colonists and that they were in circulation by the end of the 1740s.

The second song is the “visit to the camp” narrative seen in verses 3 to 12, the story most prominent in Coverly’s broadside. The third thread in this composite text is in stanzas thirteen through eighteen, describing harvest frolics in the same burlesque vein. The chorus “Corn stalks twist your hair off” is usually associated with this lyric. Shades of all three storylines can be found in John Vardill’s Procession, with the Standard of Faction (1770), but there with a chorus indicated as “Yankee doodle, &c.”

The earliest extant print of these narratives with music is an English engraved song sheet entitled Yankee Doodle; or (as now christened by the Saints of New England), The Lexington March. It was probably printed in the summer of 1775, before the news of the battle of Bunker Hill had reached England. The subtitle suggests that an earlier text had been renamed. The older text, a mixture of all three folk songs, had not been changed to reflect any of the recent hostilities—only the title connects the piece to the action in Lexington. The tune is the familiar one but the lyrics have no chorus and its new name is “The Lexington March.” Evidently, at some time between the 1740s and the 1760s, a new tune became associated with the old lyrics.[2] As we shall see, the name “Yankee Doodle” certainly became associated with this tune by 1768.

Chronologically, the earliest known direct reference to the now-familiar duple-meter “Yankee Doodle” music was in Boston, where the British ships anchored on September 29, 1768, and “the Yankey Doodle Song was the Capital Piece in their Band of Music.” The tune was recognized by patriots in boats in the harbor and reported in the Pennsylvania Chronicle on October 17. This incident suggests that a lyric insulting Americans with that title already existed to the tune and that both the players and hearers recognized its import. By 1769, several references to the tune indicate that it was meaningful to satirists and listeners in London and in the colonies:

A dance in Boston was violently disrupted when several British officers called for the band to “play the Yanke Doodle tune, or the Wild Irishman, and not being gratified they grew noisy and clamorous.” (New York Journal, February 23, 1769)

In September, also in Boston, an officer “in a sneering manner” called for the musicians to “play up the Yankee Doodle tune, which completed the conquest of the military, and afforded them a temporary triumph” over a number of restless young people who had gathered to hear the band play. (New York Journal, September 14, 1769)

In the early 1770s, the “Yankee Doodle” tune and elements from the old songs were used in various other satirical ways, but the high point came when British fifers played it as they marched out to Lexington and Concord on April 19, 1775. As they drove the British back to Boston, Patriot fifers took up the tune and at that moment, the possession and import of playing “Yankee Doodle” changed hands (Massachusetts Spy, May 10, 1775). Several weeks later, Ezra Stiles wrote that the delegates of the Congress were ferried from New York to New Jersey, passing under the British warship “with fifes playing [the] Yankee tune (the same the Regulars playd in the march to Concord) . . . with great spirit & triumph” (Stiles, Literary Diary 1:553).[3] There are no more citations of British fifers playing “Yankee Doodle.” The tune appears in several American fifers’ manuscripts dating from 1776 to 1778, it was featured in the surrenders at Saratoga and Yorktown, and in 1782 it was printed in Glasgow with a set of variations (Curry; R. Keller; Selection of Scotch 36).

While the Cape Breton song, with its unflattering description of Brother Ephraim as a coward, was probably the text that gave the tune its chief meaning from 1768 to 1775, it would be a reworking of the “visit to the camp” idea that carried it to fame after that.

In the revised song, the narrator, presumably a young lad, is mystified by the things he sees and does not recognize. The narrative is part riddle, part satire, and part burlesque. Only the practical concern in verse 3 about the soldiers’ excessive consumption of molasses betrays a sophisticated observer masking as a clown. With Washington depicted as a captain, the revisions to the old text may have been made shortly after his arrival at the camp in Cambridge on July 2, 1775, and before local prejudice against his being named commander in chief had been overcome. The clever text probably circulated in handwritten form at first, usually called “The Farmer and His Son’s Return from a Visit to Camp,” with the word “Camp” in larger type, or “A Yankee Song.” The earliest print of the text is on a broadside possibly printed by Ezekial Russell in the mid-1780s. The song and particularly the tune caught the imagination of generations after and was reprinted, added to, and parodied hundreds of times, appearing in six songsters between 1804 and 1815 (R. Keller). In The Contrast (1787), Royall Tyler’s stage Yankee, named Jonathan, sings the first 3 verses and breaks off, saying that he knows only 190 verses, but “our Tabitha at home can sing it all.” In the Thomas collection alone there are eight songs using the model and tune of “Yankee Doodle.”

[1] See Jonathan’s Courtship, also to the tune of “Yankee Doodle,” and John Bull’s Description of a Church for other examples of this comic technique.

[2] While much ink has been spilled over the origins of the melody, there are no traces before the 1760s. An old English dance tune in 6/8 time called “Doodle Doodle Do” was heavily used for satirical songs against the Walpole administration in the 1740s and continued as a vehicle for vicious political texts over the next two decades, many illustrated by engravings. See, for example, the texts on prints listed in Stephens 3:#2016, 4:#3815, #3887, #3975, #4001, #4007, #4021, #4133, #4147, and #4162. In the 1760s, “doodle do” became conflated with the term “Yankee doodle do” in satirical songs but lyrics remained in compound meter; that is, 6/8 time. This conflation may be reflected in the usual earliest reference, the script of Philadelphia ballad opera called The Disappointment that was written in 1767 but never performed. One of the airs has a chorus marked “Yankee doodle, &c.” However, the singer is a German tailor and the lyric are closer in style to the Raree Show tradition from which the “Doodle do” songs sprang. Thus, the intended tune in this particular case may well have been “Doodle do.” It most certainly was the tune for “The Yankie Doodles Intrenchments Near Boston 1776,” an English caricature and song (Stephens #5329). A British song sheet entitled The New Raree Shew; or, A Touch on the Times (ca. 1780) in the Marshall Collection at Harvard carries the tune and other Raree Show lyrics. See Lambert 1:142-45 for facsimiles of both these prints.Assertions in many narratives that the “Yankee Doodle” tune is Dutch or European are without historical foundation. The modern chorus, “Yankee Doodle came to town, riding on a pony,” dates from 1842. For further documentation, see Sonneck, Report 79-156, and Fuld 659-60.

[3] Our thanks to Susan Cifaldi for this citation.

Father and I went down to camp. 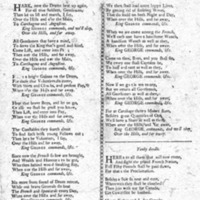 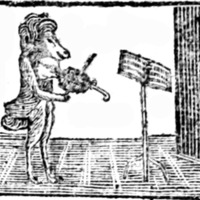 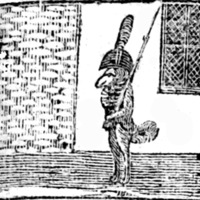 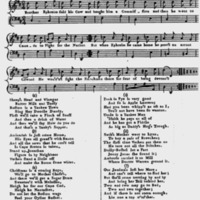 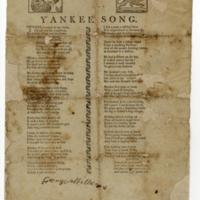