The tempest, together with "The last time I came o'er the moor"

Click below to hear the first and fourth verses of "Last Time I came O'er the Moor," plus one extra
performed by David & Ginger Hildebrand

The first text here is described in another broadside of the same title, The Tempest.

The second text, “The Last Time I Came O’er the Moor,” is by the Scottish poet Allan Ramsay (1686-1758), published in his Tea-Table Miscellany (1724). It became a classic “Scots” song, reprinted in all collections of Scottish songs and on sheet music, and parodied in The Beggar’s Opera; it appeared in fourteen songsters between 1788 and 1817 (Roud #8496; R. Keller, Early American Secular Music and Its European Sources and Early American Songsters). The broadside version omits Ramsay’s final verse.

The next time I go o’er the moor, she shall a lover find me;
And that my faith is firm and pure, tho’ I left her behind me.
Then Hymen’s sacred bonds shall chain, my heart to her fair bosom,
There, while my being does remain, my love more fresh shall blossom. (Poems of Allan Ramsay 2:148)

Written in English without any Scottish words or phrases, it was a love song for a growing English market for songs about Scotland and was based on an older lyric and tune (Johnson and Stenhouse 2:18-19). It would be much later that Robert Burns (1759-96) made songs in Scots acceptable, perhaps because of the times he lived in, times in which the rough, unpolished native was fashionable as a romantic object of literary interest.

Cease, rude Boreas boisterous railer.
Last time I came o'er the moor, I left my love behind me. 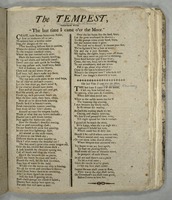 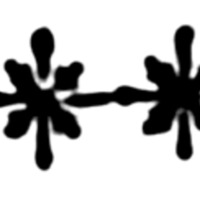 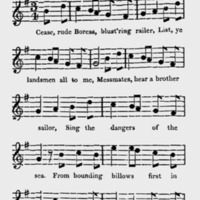 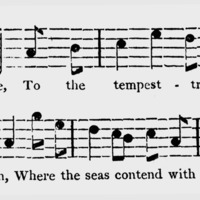 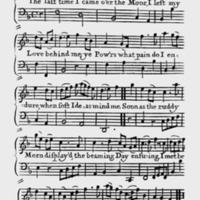 “The tempest, together with "The last time I came o'er the moor",” Isaiah Thomas Broadside Ballads Project, accessed May 29, 2022, https://www.americanantiquarian.org/thomasballads/items/show/230.