The Soldier's life: : and Tempered steel

This broadside celebrates the British soldier in the way many Charles Dibdin songs praise the British sailor. In a broadside now in the Rider Collection at Brown University the same pair of texts are titled The Bold Soldier. The bravado of the first song suggests that it may have been written by a civilian. No soldier would cheat his commander of plunder so openly as expressed in the third verse. The chorus indicates the tune, the well-known “A-Begging We Will Go,” a melody widely used for parodies and satires from its first appearance in 1684 (Simpson 40-42; Roud).

Copies of “Tempered Steel” in three American manuscripts give unmistakable evidence of the tune intended (Lauber 633; “New Liberty Song” 13r.; Fanning #3). All give the telltale chorus, “and a soldiering we’ll all go,” indicating why the two songs were printed together on this broadside: they were intended for the same tune.

In the second verse this song quotes the sixth verse of the previous lyric and the references in verses 7, 8, and 11 (“rising world”) suggest that it was written or revised by an American shortly after the Revolutionary War. 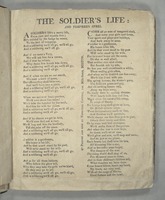