Saw ye my hero George: and The rosary. Lady Washington left Mount Vernon in June 1778, in expectation of meeting her worthy companion George; on the 28th of the same month, found her favourite engaged in the battle of Monmouth: she made the following observations

The first, second, and fourth verses of this text are a rare example of a Revolutionary-era folk song for which both the words and the music can be found in a period copy.[1] In a plaintive question and response form, the song depicts Lady Washington searching the battlefield for her husband. As it was reproduced on broadsides later, it gained the additional explanation that the song was written following the Battle of Monmouth on June 28, 1778.

The concept of Lady Washington trying to find Washington on the battlefield is unlikely but poetically may point toward later, more romantic lyrics such as The Wounded Hussar and The Dying Soldier. Martha Washington spent the winter of 1777-78 at Valley Forge with her husband and the army, just as she did every year during the war. By June she was back at Mount Vernon and did not expect to see him again until the army went into winter quarters late in the year.

More graphic verses were soon added as conflicts with Britain and France heated up and old songs revised to serve the new struggle (see “Lady Washington” in Nightingale 38-39). Like the verse added to “Cease ye fountains,” (see Massachusetts Song of Liberty) these verses demonstrate the dramatic difference between cool eighteenth-century expression and vivid nineteenth-century romanticism. Respondents were added to the narrative and a third verse with Washington “protecting the men in his charge” was inserted into the earlier text. Beginning with verse 5, the expression changes dramatically to an active description of the battlefield. White printed the text in this form and the same song was collected from a folk singer in the 1930s, perhaps kept alive by broadside printings (Eckstorm Folk Song Collection at the University of Maine).[2]

The original was based on a British love song from the 1760s beginning “Saw you my father.” It has an unusual two-part tune with seven bars in each phrase. This text continued to the twentieth century in both secular and sacred traditions. As “Grey Cock” it was included by Child in his collection of British and Scots ballads.[3]

The quasi-religious theatrical piece, “The Rosary,” is taken from William Shield’s Midnight Wanderers (1793), an afterpiece set in France. Shield wrote the music and the librettist was William Pearce (active 1785-96), who provided considerable local color to the piece. “The Rosary” was issued in sheet music and even arranged as a rondo for keyboard by Jan Ladislav Dussek (Fiske 542-43; Wolfe, Secular Music #8142-44; Roud; Concord [NH] Gazette, April 26, 1814). The text appeared in twelve songsters between 1794 and 1820 (R. Keller, Early American Secular Music and Its European Sources).

[1] Both the lyrics and music are in Bush’s commonplace book (32, 62v). Bush was paymaster for the Continental Army and died in 1791. A fiddler, he copied a number of songs, tunes, and country dances into his notebook during his service and immediately afterward. See other references in R. Keller; H. Thompson 107. The text appeared in five songsters between 1797 and 1810 (R. Keller).

[2] Our thanks to Dr. Edward Ives for this reference.

[3] The original British song and a derivative revival hymn, “Saw You My Saviour,” also continued in tradition and were collected as folk songs between 1910 and 1940. See Leavitt 1:161; Schrader, “Arcade Revisited” 22-26; Child, The English and Scottish Traditional Ballad 4:389-90. 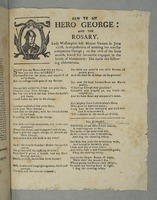 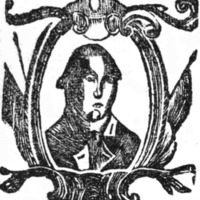 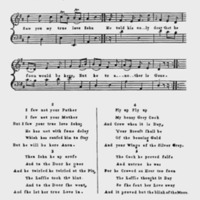 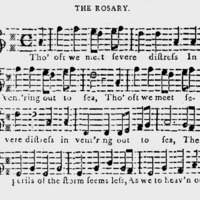 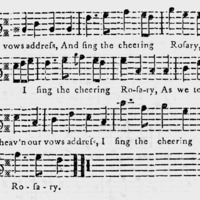 “Saw ye my hero George: and The rosary. Lady Washington left Mount Vernon in June 1778, in expectation of meeting her worthy companion George; on the 28th of the same month, found her favourite engaged in the battle of Monmouth: she made the following observations,” Isaiah Thomas Broadside Ballads Project, accessed May 29, 2022, https://www.americanantiquarian.org/thomasballads/items/show/217.