“Sally in Our Ally” by Henry Carey (ca. 1689-1743) was written in the 1710s. Albert Friedman credits Carey’s verse as avoiding “the coarse realism of street poetry without lapsing into dulcet sentimentality” (Ballad 159). Here an apprentice simply declares his love for a girl of the neighborhood and tells how on his one day of leisure, he sneaks out of church at the beginning of the sermon to “walk abroad with Sally.”

The song has had several tunes associated with it, the tune printed in Carey’s own Musical Century (1737) being the tune found with the country dance of the same name (R. Keller). This tune was changed in the later part of the century, borrowing ideas from “The Country Lass,” which itself shared melodic ideas with Carey’s tune, most notably the opening notes on an off beat, the octave skips at the end of phrases, and the jump of a ninth in the third measure from the end (Thomson 2:38-39). With its new tune, the text appeared in the Baltimore Musical Miscellany (1804) and Nightingale (1804). It appeared in fourteen songsters between 1798 and 1815 (R. Keller, Early American Secular Music and Its European Sources).

It is hard to tell from this distance whether the spirited lyric “Murtock Delarney’s Travels and Return to Ballinafad” is of Irish origin or Anglo-Irish. It does not seem to satirize, yet it does not praise. Ballinafad is in County Sligo, on the south shore of Lough Arrow, about five miles northwest of Boyle. The song was included in the script of Richard Cumberland’s Jew of Mogadore, a comic opera in three acts. After praising Ballinafad, Rooney sings this song, which was “written expressly for Mr. Johnstone, by a friend” (46-47). John Johnstone evidently created the role and is listed in the cast in this edition (Fleischmann, Sources #1486). The song also appeared in the Charlestown (WV) Farmer’s Repository as “sung in Dublin, in the Jew of Magadore” (June 7, 1811).

With a happy-go-lucky flair, Delarney goes off to seek his fortune, is shipwrecked, and winds up somewhere probably in the West Indies. There he meets an “American beauty with skin rather sooty” who he takes back to Ballinafad where they are welcomed with church bells ringing and dancing.

The tune was probably originally an Irish one. It had many names, including “The Black Rogue” and “Johnny Macgill.” In the 1790s it was known to several Americans as “Before I Was Married.” The text appeared in five songsters between 1811 and 1818 (R. Keller, Early American Songsters).

Of all the girls that are so smart, there's none like pretty Sally.
Oh I in Ireland so friskey, with sweet girls and whiskey. 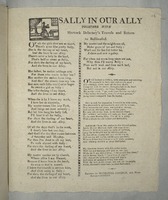 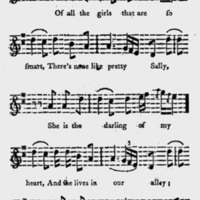 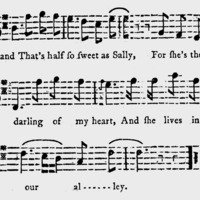 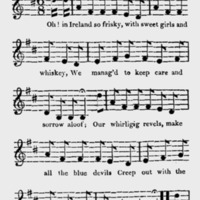 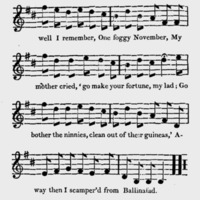 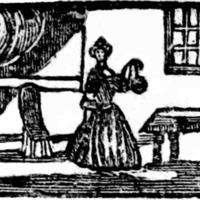