This call and response text has deep roots—the original song was licensed in 1588—and is still sung today with the burden “Fooba Wooba John.” A predecessor appears in Thomas Ravenscroft’s Deuteromelia (1609) under the rubric “Freemens Songs of 4. Voices.” The lyrics of the first verse begin “Martin said to his man fie man, fie, O Martin said to his man who’s the foole now?” In the second verse absurd contradictions begin: “I see a sheepe shering corne, fie man, fie” (Simpson 776-77).

The Coverly version seems like a nautical work song with the repeated chorus line, “hue boys, hue.” This is unusual in that we have no authentic, that is, non-theatrical, examples of sailors’ songs until later in the nineteenth century. By the twentieth century, as “Fooba Wooba,” the song had become a children’s nonsense lyric, many versions beginning “Saw a snail chase a whale.”

I saw a whale chase a snail. 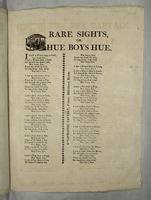 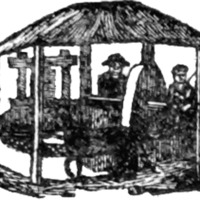 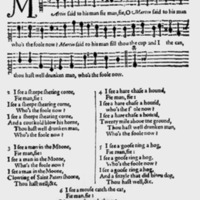