Paddy's land: together with An Irishman's heart for the ladies

“Paddy’s Land” is a personal narrative and protest song by an Irish author who professes “small education.” After praising the native Irish, he tells why they are leaving “that happy place”—because the English “took the freedom” from Paddy’s land. The final verse seems a bit incongruous, switching to a nationalistic theme praising the Irish soldiers fighting Britain’s enemies. There are many English appearances of this song in chapbooks and slip ballad sheets and it was collected in the Greig-Duncan Folk Song Collection and by Cecil Sharp (Roud #12987).

“An Irishman’s Heart for the Ladies” has survived strongly among British and American traditional musicians as “An Irishman’s Heart to the Ladies.” According to Thomas Philbrick, the text was written by Andrew Cherry (1762-1812), an Irish actor and writer, who was also responsible for The Bay of Biscay, O. The tune is “Cummilum,” a variant of the old slip jig, “Mad Moll” or “Yellow Stockings” (see An Irishman’s Observation on British Politics) (Philbrick 257; Fleischmann, Sources #2008; R. Keller, Early American Secular Music and Its European Sources; Opie and Opie 255-56).

The text itself does not seem to have had the same longevity—it appeared in two songsters between 1814 and 1817 (R. Keller)—and from the stilted classical allusions it is not surprising. It is an Englishman’s song with a few gratuitous Irish terms and concepts. The “Rum ti, &c.” burden suggests that the last phrase of music be repeated. In America the text appeared in 1814 as “a favourite comic Irish song” in the songster American Star (168) and in the New York Shamrock (March 25).

One evening all alone as I sat in my easy chair. 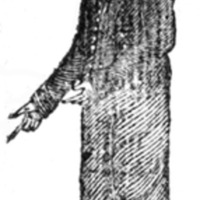