A New song in favour of courting:

Another song about bundling (see A New Bundling Song) with the final moral line to “keep your bodies pure,” this same text was preserved in a now-unlocated manuscript written by a schoolteacher named Israel Perkins. Quoted in full by Henry Stiles, Perkins’s version is a close copy of the broadside, omitting verses 6 and 10, and adding eight verses after verse 13 (95-101). The added verses appear to describe affairs in a specific town, and seem later in expression than the broadside lyrics. The scribe’s title, “The Whore on the Snow Crust,” came from this section. While a date of 1786, when Perkins was eighteen, is given for this effusion, the language seems more appropriate for several decades later, written perhaps when he was an older man. The spelling out of the word “whore” rather than the more customary “wh—” seems out of place for the early period and this section interrupts the general flow of the original song with a defense of bundling based on the fact that beds are not the only place to make love.

Now unto those that do oppose
The bundling trade, I say
Perhaps there’s more got on the floor,
Than any other way.

Adam at first was form'd of dust. 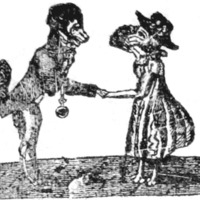