A New Irish song, together with the Banks of the Dee

On January 20, 1812, about a month after the Alknomac’s landing on Martha’s Vineyard, the Boston Independent Chronicle carried this article on the end of her voyage, different than the report given in “The New Irish Song”:

Commodore Rodgers / The ship Alknomac, capt. Hicks from Otigo, was cast ashore at Martha’s Vineyard, about the middle of Dec. Last. Com. Rodgers, in the President, on a cruise, made a harbour there the same evening, and not only promised and rendered them every service in his power, but generously gave each passenger, 80 in number, two dollars each!”

It is curious that “The New Irish Song” does not mention Rodgers or his generosity. With the article’s headline “Commodore Rodgers” and the spotlight of the article fully on Rodgers and his actions, it is possible that Rodgers himself submitted the piece to the Chronicle.

An unexplained reference in the broadside is in verse 9. It seems to be directed at Captain Hicks himself:

Provisions also is consumed, but he may well remember,
That he had met with capt. West on the tenth day of December.

From the details of the broadside narrative, the author must either have been aboard the ship or read or been told a very detailed description of the journey. Since the accusations against Captain Hicks are not likely to have been printed in a newspaper and Rodgers’s payments are not mentioned in the narrative, one would suspect that this text was a personal condemnation by the author, especially considering his last line: “I think we will not go back, along with Wicks, so full of tricks in the cursed ship Alknomack.” Although this is called an “Irish” song, it is more a protest against bad weather, a jinxed ship, and a cheating, drunken captain. The “Irish” aspect perhaps is chiefly focused on the dangers of the voyage across the Atlantic that had been faced by most of Coverly’s Irish patrons who purchased the sheet.

With seven accents in each line, a tune for this “song” would have to be quite different from most, if one were found.

Folk song scholars sometimes comment on the absence of an “original” version of a folk song for study and analysis of changes through the years. This is true for most folk songs but there are some interesting exceptions, “The Banks of the Dee” being an outstanding one.[1] It is well rooted both in eighteenth- and nineteenth-century documents and in twentieth-century oral tradition (Schrader, “Meandering Banks” 65-84). In the test of commercial popularity of a song by the number of piracies, sequels, parodies, dance versions and title adaptations it generated, this song is well above average in both Britain and America.

The text had its beginning as an Irish text to an older Irish tune (Roud; R. Keller, Early American Secular Music and Its European Sources). It was written by John Tait (1748-1817), an Irish poet, as a woman’s lament in honor of a young friend going off to fight in the British army against the American rebels (Schnapper 549). The earliest dated copy of the lyrics of this particular text is in the Pennsylvania Ledger of December 17, 1777, “A Favorite New Song to the Tune of Langolee.”[2] The editor of this loyalist newspaper probably received the song directly from overseas as the British army was in control of Philadelphia and its press during this period.

However, “The Banks of the Dee” was written for a genteel market and was printed in London and in Dublin on engraved sheet music in arrangements for voice and keyboard. While it was loyalist in the explanation of why Jemmy had gone off to war, most of the song had a strong sentimental appeal that transcended politics. The text was frequently copied and reprinted in American songsters without change, even to the specific line, “to quell the proud rebels,” which, of itself, is a bit of a compliment. It appeared in twenty songsters between 1788 and 1820 (R. Keller).

[1] The River Dee rises near Bailieboro in County Cavan and flows northeast for over thirty miles before entering the Irish sea at Annagassan, midway between Drogheda and Dundalk.

[2] The tune called “Langolee” was also known as “New Langolee.” Once it became associated with “The Banks of the Dee” text, it became more widely known under that name. An older, related tune became known as “Old Langolee.” “Langolee” is an Anglicization of the Irish Leaingó Lí, meaning membrum virile (Fleischmann, Sources #1266).

Let every jovial Irish soul desirous of promotion.
Twas summer and softly the breezes were blowing. 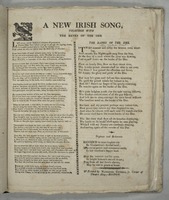 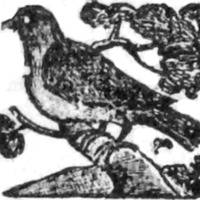 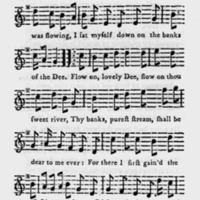 “A New Irish song, together with the Banks of the Dee,” Isaiah Thomas Broadside Ballads Project, accessed May 29, 2022, https://www.americanantiquarian.org/thomasballads/items/show/172.