Lines composed on the death of Parker, Who was hung at the yard arm, for mutiny, in England

Mutiny in the navy is a very serious matter and while the mutiny for which Richard Parker (1767?-97) was hanged was certainly understandable, no mutiny is excusable. Demanding improved pay and better treatment, the crews of sixteen British ships staged a collective mutiny at Spithead in April 1797. It was conducted in a peaceful and organized manner and within a few weeks, their demands were met and a royal pardon given. A month later, another mutiny occurred with further demands. In addition, the mutineers attempted to block the trade channels up the Thames. The government quickly outlawed the activists and the mutiny fell apart. Most of the leaders were hanged, notably their leader Richard Parker, who died on June 30, 1797.

Within the year, the entire story of the trial and execution of Parker was published in a sixty-page pamphlet in Boston (Parker and Sibly). At least two songs were written about this execution, both ostensibly narrated entirely by Parker’s widow. One, “The Widow Parker’s Sorrowful Lamentation” that begins “O pity a widow, with sorrow opprest now,” did not see many additional printings (Madden Collection 6:1930, 220). But the text on this broadside, a dramatic song beginning “The Gods above protect the widow,” where the wife’s love for her husband is stressed throughout, was widely circulated on broadsides and slip ballads in England. There are at least sixteen copies at the Bodleian Library, but fewer in America, Coverly’s and several printed in the 1830s. The text appeared in two American songsters between 1817 and 1818, the year that another text beginning “You that plow the briny billows” was printed in Bird of Birds. The resurgence of popularity is perhaps explained in the header of this piece: “Death of Admiral [sic] Parker, who was executed at the Nore in England, for interceding for ‘Sailor’s Rights.’”

The fact that this song about a very specific execution continued to be printed well into the nineteenth century points out the persistence of some texts long after the actual happening. A dramatic text is a good text, no matter when it happened in real life. The changes to the woodcut demonstrate that Coverly printed the song sometime after his use of the woodcut on The Last Words of S. Tully illustrating the Samuel Tully execution on December 10, 1812, a full fifteen years after the Parker hanging. Coverly had identified a good market for such sensationalist broadsides, regardless of location of the event, and was willing to destroy the details of a more elaborate woodcut for use with this text. The fact that Parker was hanged from a ship’s spar, not a land gallows, apparently did not affect the selection of this cut to decorate the broadside.

Gods above protect the widow. 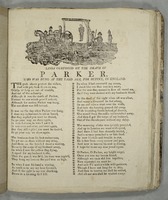 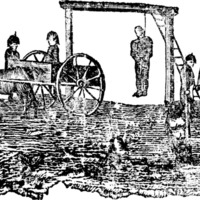 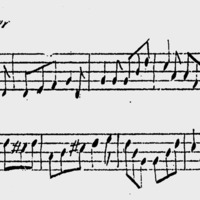 “Lines composed on the death of Parker, Who was hung at the yard arm, for mutiny, in England,” Isaiah Thomas Broadside Ballads Project, accessed May 29, 2022, https://www.americanantiquarian.org/thomasballads/items/show/148.