One form of amusement for sophisticated writers in all ages has been making fun of the ways of the less privileged (Sutherland 95). “Jonathan’s Courtship” is a prime example. It was first published as a broadside around 1795 when the author, Thomas Green Fessenden, was a junior at Dartmouth College. Fessenden (1771-1837) was born in Walpole, New Hampshire, eldest son of the longtime pastor of the Walpole church (A. Johnson). His use of dialect indicates his familiarity with “peasant” diction. The song was set to “Yankee Doodle” using the subject of a country rube, “sir” as a line-ending filler, and the text reference “and scamper’d like the nation,” all direct quotations from The Yankees Return from Camp.

The song was printed again in the Concord (NH) Federal Mirror on June 21, 1796, with a few verses not on Coverly’s broadside (A. Johnson). A much longer version appeared in Fessenden’s Original Poems (70-85). Here Fessenden suggests that Jonathan’s experiences were true to life.

The Country Lovers; or, Mr. Jonathan Jolthead’s Courtship with Miss Sally Snapper: an excellent new song, said to be written by its author: and really founded on fact. Tune—“Yankee Doodle.”

In this longer version, in the eighth verse from the end, Fessenden quotes another text that he apparently wrote, also set to “Yankee Doodle,” a text that is today known only through oral transmission. Sally asks her trembling suitor:

“Are you the lad who went to town,
“Put on your streaked trowses,*
“Then vow’d you could not see the town,
“There were so many houses?” Yankee doodle, &c.

Fessenden’s asterisk is for a footnote, “Vulgar pronunciation of the word trowsers,” indicating his intentional use of common expression in the song. The song continues:

Our lover hung his under lip,
He thought she meant to joke him:
Like heartless hen, that has the pip,
His courage all forsook him. Yankee doodle, &c.

For he to Boston town had been
As matters here are stated;
Come home, and told what he had seen,
As Sally has related. Yankee doodle, &c.

According to Oscar Sonneck, this verse was collected by George H. Moore from an “old gentleman who recalled [it] about 1830 as one of a ditty common in his own school days” but Sonneck had found no earlier source (Report 129; Lawrence 259).

Merry tale I will rehearse. 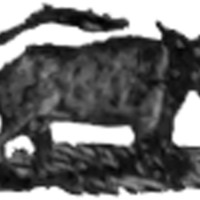