Hail Columbia: together with a favorite song, celebrating the naval prowess of America at the commencement of the Revolution

Click below to hear the tune for "Hail, Columbia"
performed by David & Ginger Hildebrand

Click below to hear the words to "Hail, Columbia" sung by
David Hildebrand accompanied by Ginger Hildebrand.

Philip Phile was a Hessian soldier and musician who chose to stay in America at the end of the Revolution. He appeared as violin soloist on concert programs in Philadelphia in 1783 and in 1784 became leader of the orchestra of the American Theater Company. In 1789, he wrote a march in honor of the newly elected president that was featured at theaters in New York and Philadelphia (Sonneck, Report 50-63).

Columbia had become the poetic name for the United States, deriving, of course, from that of Christopher Columbus. When Joseph Hopkinson (1770-1842), son of Francis, author of The Battle of the Kegs, wrote patriotic words to Phile’s tune, the march achieved immortality. As “Hail Columbia,” it competed for nearly one hundred years with “The Star-Spangled Banner” as our national anthem. Here, the last verse praises Washington, honoring his decision to serve his country “once more,” this time leading the mobilization of troops in July 1798 when the war with France threatened.

Much later, Hopkinson described the circumstances that led to his composition of the poem. Gilbert Fox, an actor-singer in the theater, was going to have a benefit in Philadelphia. He despaired of having a decent house and went to his old school chum on the Saturday afternoon before the performance asking if he would write him a patriotic song adapted to “The President’s March,” something various members of the company had been trying to do without success. Unruly theater crowds had been calling for “The President’s March” to be played by the orchestra, and they needed some words to it. Hopkinson said he would try to write something to raise the American spirit but be above the party strife and national passions then abounding. He succeeded admirably. The benefit, at which “an entire New Song (written by a Citizen of Philadelphia) to the tune of the ‘President’s March’ will be sung by Mr. Fox; accompanied by the Full Band” was advertised in the Porcupine Gazette on April 24, 1798. The theater was full on the twenty-fifth and the song met with immediate success. Newspapers and magazines quickly reproduced the lyrics and music publishers issued sheet music. Both the words and the music have been widely copied and printed ever since (Sonneck, Report 40-44). The text appeared in fifty-four songsters between 1798 and 1820 (R. Keller; Lawrence 142).

The anti-British song, another parody of “The Wat’ry God,” was written by Jonathan Mitchell Sewall (1748-1808) of Boston. It was first printed in the Boston Independent Chronicle on December 19, 1776.[1] An erudite song, it is full of classical references and elided words, its purpose to celebrate “the Naval Prowess of America at the commencement of the Revolution.” A variant was printed in a songster titled the Eagle and Harp (1812) with the note, “It is pleasing to observe the similarity in the sentiments of American Patriots in 1776 and 1812.”

Sewall was a lawyer and occasional poet, grandnephew of Samuel Sewall, the diarist from Salem, Massachusetts. According to the Dictionary of American Biography, “Orphaned at an early age he studied law and settled in Portsmouth, New Hampshire. He first attracted attention as a poet with his patriotic ballad ‘War and Washington.’ A vehement Federalist, he wrote several odes in honor of Washington’s visit to Portsmouth in 1789 and his speeches and poems were in demand at Federalist banquets” (16:608-9).

[1] In the South Carolina and American General Gazette on November 20, 1777, the text is credited to “Mr. Sewell of Boston.” It was later published in Sewall’s Miscellaneous Poems 76-78 as “A Song, written in 1776—in imitation of the ‘Watry God.’” The text appeared in one songster, published in 1812 (R. Keller). 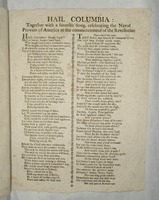 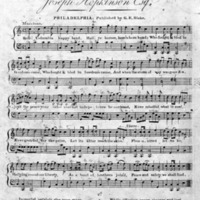 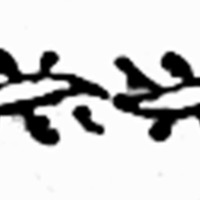 “Hail Columbia: together with a favorite song, celebrating the naval prowess of America at the commencement of the Revolution,” Isaiah Thomas Broadside Ballads Project, accessed May 29, 2022, https://www.americanantiquarian.org/thomasballads/items/show/128.