Battle of the kegs

The author of this broadside, Philadelphia native Francis Hopkinson (1737-91), married the daughter of Colonel Joseph Borden of Bordentown, New Jersey, and moved to his wife’s hometown to begin his law practice. He was elected to serve on the Continental Congress as a delegate from New Jersey, signed the Declaration of Independence, and served as chairman of the Navy Board during the Revolutionary War. In that role he became intrigued with the innovative experiments of David Bushnell, a Connecticut inventor who had already built a primitive submarine and functional torpedo. In 1777 Hopkinson invited Bushnell to come to Bordentown, where his father-in-law supervised a depot of military stores.

With Borden’s encouragement, Bushnell created a number of paired floating mines, their connecting lines intended to snag on ships’ anchor cables and cause the bombs to swing in with the current and strike the British ships moored some twenty-six miles down the Delaware River off Philadelphia. Sometime during Christmas week, Bushnell and Borden released ten paired mines into the ice-filled Delaware River. One pair, apparently out ahead of the majority, was spotted by two boys, whose curiosity proved lethal, but the occurrence was not seen by any British patrols and so they remained in ignorance. Later, on January 5, 1778, another pair was sighted by a British barge crew off Philadelphia. When they heaved it aboard, it exploded, killing four sailors and wounding all the remaining crew. This time, the explosion was seen from shore and the alarm raised. Men on ships and shore alike began firing at anything floating in the river while the troops were put under arms. The citizenry flocked to the waterfront to watch the brouhaha. Whether or not any other mines turned up is unrecorded, but the occasion gave rise to much hilarity amongst the Patriots (Coggins; Maclay, History of the Navy; Sag Harbor (NY) Suffolk Gazette, August 24, 1807).[1]

On January 21 a news story satirizing British bafflement over these strange kegs appeared in the (Burlington) New-Jersey Gazette, declaring that “Monday the 5th of January 1778, must ever be distinguished in history for the memorable Battle of the Kegs.” This account hit its mark and on February 11, the Pennsylvania Ledger, a loyalist paper, printed a rebuttal, saying that a few guns were fired, but otherwise “no notice was taken” of the kegs. On February 23, a twenty-two verse lyric appeared in the New-Jersey Gazette with the title “The Battle of the Kegs”; on March 4 the verses gained a longer title in the Pennsylvania Packet: “British Valour Display’d; or, The Battle of the Kegs.” The song, ridiculing the morals and courage of the English troops, soon appeared in four more newspapers, and thirty-two songsters between 1785 and 1818 (Curry; R. Keller). It was unsigned but Francis Hopkinson was soon identified as the author. A skilled harpsichordist, organist, and lyricist, as a young man Hopkinson had written music for several songs but in the 1770s and 1780s he selected preexisting tunes for his topical or humorous lyrics.

“The Battle of the Kegs” had no tune indication when it appeared in the early newspapers, although the tag of “sir” on the ends of many lines points to “Yankee Doodle” as a probable match, and that tune is indicated in some post-1800 songsters. It was most likely the tune Hopkinson had in mind originally, a perfect combination of tune and text making fools of the British. Whittier Perkins wrote out a unique tune called “Battle of the Kegs” in about 1790, but the match most often found is the old Scot’s song “Maggie Lauder,” the indicated tune when the text was published in Osborne’s (Portsmouth) New-Hampshire Spy on April 7, 1789, and written into several contemporary manuscript sources.[2]

Our drums and fifes afforded us a favorite music till evening, when we were delighted with the song composed by Mr. Hopkinson, called the “Battle of the Kegs,” sung in the best style by a number of gentlemen. (Thompson, “Table ” 70-73; Thacher 204)[3]

Evidently pleased with the song himself, Hopkinson sent a copy in his own hand to Benjamin Franklin in Paris (Hastings 295).

The version on Joseph White’s broadside is close to Hopkinson’s, lacking only the seventeenth quatrain which would be needed to make the lyrics fit the full sixteen-bar tune.

The rebel dales, the rebel vales,
With rebel trees surrounded;
The distant wood, the hills and floods,
With rebel echoes sounded. (Hopkinson 3, pt. 2:169-73)

[1] Thanks to Commander Martin for his help with this essay.

[2] An early version called “Moggy Louther” appeared in Collection of the Most Celebrated 17. This tune appears with the Hopkinson lyrics under the title “Maggy Lauder” in Van Rensselaer 1:11; Aaron Thompson’s version gives “Maggie Lauder” as the indicated tune for the same text (“Collection” 36-39). A broadside edition of the song at the John Hay Library gives “Molly Lawder” as the indicated tune, suggesting oral transmission of the same tune information.

[3] Our thanks to Susan Cifaldi for this citation.

Gallants attend, and hear a friend, trill forth harmonious ditty. 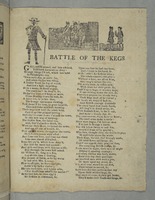 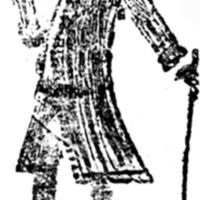 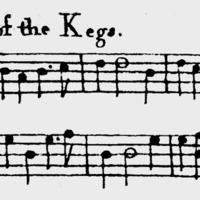 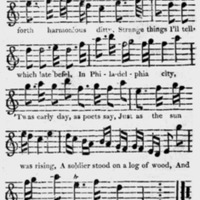 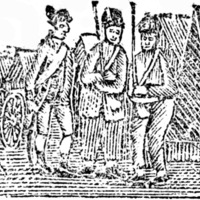