The Happy child, being a narrative of the holy life and peaceable death of a remarkable pious child of Hertfordshire----England

One of Coverly’s most frequently printed texts, this lengthy English narrative of a “remarkable pious child” has several sections, at least one of which lived an independent life. In the opening section the child’s father dies and the mother is credited with her training. When her schoolmates swear, she takes them to task, and they turn against her. In the middle of the second column, twenty lines tell the tale of the “False Knight upon the Road.” The devil tempts the child, who finally, in the name of Jesus, causes him to fly away “in flames of fire” (Child, English and Scottish #3). The “False Knight” song came into print in the 1820s rooted in Scottish tradition but it has since been collected in Canada and the United States (Roud; Bronson, Singing Tradition 13). Whether it came from this longer song is not clear.

The last section is a deathbed experience in which an angel soothes the child’s tears and tells her she is too good to live on earth. A final quatrain is appended with the moral—not a very encouraging one for young children. If they live piously, they will “also like her die.”

While the opening is reminiscent of The Children in the Wood the meter of the second line in this song is different. “The Happy Child” appeared in a number of early nineteenth-century broadsides. The AAS collection includes at least fifteen, printed in Boston, Hartford, Newburyport, Newport, and Hudson, New York.

You parents that have children dear, to what I shall relate give ear. 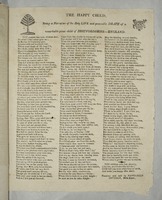 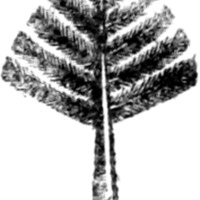 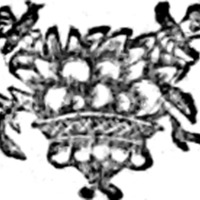 “The Happy child, being a narrative of the holy life and peaceable death of a remarkable pious child of Hertfordshire----England,” Isaiah Thomas Broadside Ballads Project, accessed November 29, 2021, https://www.americanantiquarian.org/thomasballads/items/show/124.