Girl of my heart, together with Crazy Jane, and the Wood robin

“The Girl of My Heart” by William Shield is full of the images of the late eighteenth-century English gentry: deer parks, grounds, hounds, routs, balls, and the wealth of the Indies. The song remained in memory as long as 1891 when Clare in Thomas Hardy’s Tess of the D’Urbervilles refers to the song as a help to get the cows to let their milk down (ch. 49). The lyric is credited to John Rannie in the Universal Songster and appeared often in broadsides, songsters, and chapbooks in England and in America (Universal Songster 1:348; Wolfe, Secular Music #8045-52; Roud). The text appeared in twenty-three songsters between 1807 and 1820 (R. Keller, Early American Songsters).

“Crazy Jane” is described on the broadside Tom Tough.

The idyllic “Wood Robin” was composed by Reginald Spofforth (1770-1827). It is a through-composed song with a birdlike flute part that complements the vocal line and as the sheet music suggests, “could be played on the upper part of the piano by a second person.” First published in London as “Julia to the Wood Robin, a Favourite Canzonet” (1799), it appeared in a number of editions in America from 1800 on (Wolfe, Secular Music #8497-8510). The text appeared in eleven songsters between 1805 and 1818 (R. Keller, Early American Songsters).

I have parks and I have grounds.
Why, fair maid, in every feature, are such signs of fear exprest?
Stay sweet enchanter of the grove. 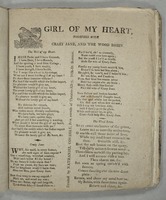 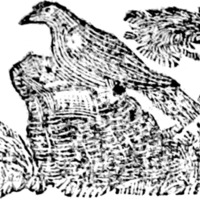 “Girl of my heart, together with Crazy Jane, and the Wood robin,” Isaiah Thomas Broadside Ballads Project, accessed August 10, 2022, https://www.americanantiquarian.org/thomasballads/items/show/116.