Louis Prang first became interested in public art education while teaching his young daughter Rosa to paint. None of the paints sold in the United States matched his standards for quality and safety, so he traveled to Germany to seek out new options. It was there that he developed his own formulas for watercolor paints, which he had produced in Germany and sold here in the United States. It was also during a trip to Germany that Prang realized the differences between Europe and America's methods of art education for both men and women. 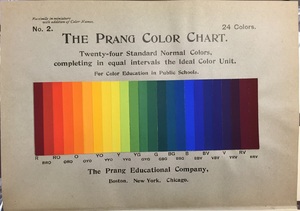 While children in upper class Boston did receive art training in finishing schools, Prang wanted to foster natural talent in those students in public schools who did not have the same access to art education. After convincing his circle of friends that public school art education was being tried in other large cities such as London, Prang was able to draft English educator Walter Smith to come to Boston as director of art education for the state of Massachusetts. Once Prang was able to establish a program for art education, he needed to supply the schools with the proper tools, including art supplies and instruction manuals. He hired John S. Clark, an art educator, to run the publication part of the process, and Mary Dana Hicks, an art educator from Syracuse, New York, to start writing and teaching courses.

By 1882, the Prang Educational Company was formed, dedicated to supplying schools with art manuals and supplies. The 1882 catalogue was 300 pages, and gave discounts for teachers and professional artists. It included supplies for oil painting, watercolors, papers, engraving tools, lithographic pencils, and other instruments for creating works of art.

Mary Dana Hicks was born in Syracuse, New York, and after losing her husband in a drowning accident in 1858, she focused her attention on her young daughter's education. She became an art teacher at the high school in Syracuse, eventually becoming the supervisor of art education for the entire city. She helped found the Social Art Club of Syracuse, and appeared before the Woman’s Congress in 1875 and 76, promoting art education, public exhibitions and the establishment of more museums. Her promotion of art education eventually caught the eye of Louis Prang in Boston, and in 1879, he called on her to come to Boston to assist him in his push to establish art education in the public schools. Between 1880 and 1882, Hicks traveled to schools in Boston, New York, Philadelphia and Chicago, teaching Saturday morning classes to art instructors how to teach. She eventually became the director of the Prang Normal Art School in 1884, and created similar classes teaching educators how to teach art within state universities, that gave students college credit. She also edited and authored many of Prang’s art texts with John S. Clark. After the death of Prang's wife Rosa in 1899, he married Hicks the following year. Together, they traveled the country, promoting their ideas of art education, and their materials.

After Louis Prang's death in 1909, Hicks lived with her step-daughter Rosa and returned to school, as a student at Radcliffe College. She graduated with an Associates Degree in Arts in 1916, and went on to get her Master's Degree in Education from Harvard University in 1921, at age 85. She died in 1927.

Color instruction; suggestions for a course of instruction in color for public schools 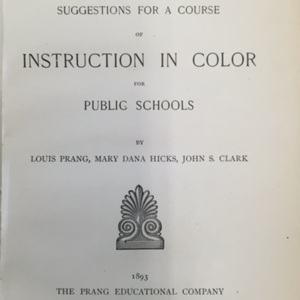 This text book, co-authored by Prang, Mary Dana Hicks and John S. Clark, was meant for the use in public schools to teach color theory and…

Water-color studies, for the use of art-schools and art-students. 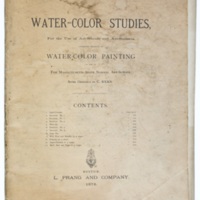 This text book used chromolithographs to teach the art of watercolor painting. The twelve floral scenes were after artist C. Ryan. Some of the works… 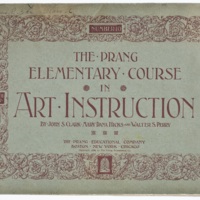 This text book was used for the second half of the seventh year as part of Prang's seven year art education curriculum. This copy is signed by…