Louis Prang was born in present day Poland (then part of Prussia), March 24, 1824. Under the tutelage of his father, a printer of calico textiles, and learned the art of dyeing, engraving and printing. He then spent his young adulthood travelling through Germany, learning from other calico printers, as well as working in a paper mill as a chemist. As a young man, he became involved in the politics of the German Revolution in 1848 and was forced to flee the country. He arrived in New York two years later, working at various printing establishments before settling in Boston and marrying Rosa Gerber, a woman he had met in Paris in 1846. It was his wife who encouraged him when he began in the partnership of Prang & Mayer in 1856. He learned the art of lithography from his business partner, Julius Mayer. The new firm’s first published lithograph was an image of roses, inspired by his wife’s love of the flower, and published in an 1857 issue of The Ladies’ Companion. He remained with the firm until 1860, when he bought out his partner and went into business by himself under the new firm name of L. Prang & Company.

The new business Prang began faced many challenges, but he turned these challenges into opportunities. The nation was becoming divided and war was imminent. When the Civil War broke out, it was suggested to Prang to print a map of Charleston Harbor illustrating a battle at Fort Sumter. The map was a financial success, and Prang followed it up with numerous maps of the southern battles that were published as soon as possible for those interested in following the battles. At the same time, the company was publishing other items related to the war, including colored “album cards,” which were usually sold in packs of twelve and sold for fifty cents a set. Many of these cards featured scenes by war illustrator and celebrated painter Winslow Homer. Other album cards featured more pleasant scenes of animals, local landscapes and flowers.

During the Civil War, in 1864, Prang and his family traveled back to Europe, where Prang studied European color lithographic methods. He also met and convinced a handful of artists to come to Boston and work for him. Upon his return, he produced his first chromolithographs in 1866, a set of  Cuban scenes. His next chromos were a set of two landscapes by Boston artist Alfred T. Bricher, including “Early autumn on Esopus Creek.” Though these first attempts were not commercially successful, other genre scenes including Arthur Tait’s “Group of chickens” were, and Prang’s business prospered enough to warrant a new factory in Roxbury, Massachusetts in 1867.

Prang began publishing a journal and catalog of his chromos beginning in 1867 to further market his oil-painting-like prints. The success of these prints propelled Prang’s business. He won numerous medals for his works, and orders came in from all over the world to buy these prints, including from South America and India. Eventually, Prang opened offices in Chicago, New York, and San Francisco, with foreign agents in London, Berlin and Melbourne, Australia.

While exhibiting his work at the Vienna World’s Fair in 1873, Prang was advised by the wife of his London agent to sell his floral-designed business cards as Christmas cards. Prang agreed, and after testing the cards in Europe in 1874, introduced them to the American market in 1875. The cards were wildly successful and presented little-known artists and art students, many of them female, to the public.

Prang’s interest in art and printing methods also led him to be an advocate of public school art education, a concern that fueled his later career after he sold his art business in 1897. Beginning in the 1860s, Prang published drawing books and sets of drawing cards for beginners to copy from, and by the 1870s he was publishing art education texts for use in public and art schools. Mary Dana Hicks, a former art teacher in Syracuse, New York, helped Prang realize his goals for art education. He convinced Hicks to move to Boston, where she became an advocate for art education beginning as young as kindergarten, and eventually became the director of the Prang Normal Art Classes, and eventually became his second wife. After Prang sold his interest in the art company in 1897 to the Taber Company in Springfield, Massachusetts, he spent his retirement travelling with Hicks promoting his educational texts and art supplies. Prang died in 1909, at the age of 85, of pneumonia while on one of these marketing trips in California with his wife.

What is a Chromolithograph? → 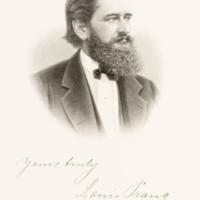 Portrait of Louis Prang taken from the 25th anniversary of Prang's career in lithography, in 1881. "The Prang souvenir" highlighted the achievements… 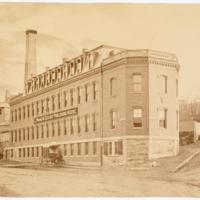 Here is a view of L. Prang & Cos. second factory building in Roxbury, Massachusetts, just outside of Boston. The first building, opened in 1867, was… 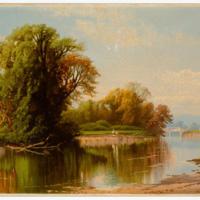 This landscape is one of L. Prang & Cos. first published chromolithographs. Part of a set of two, depicting scenes by Alfred T. Bricher, the set…