Fields of Vision: The Material and Visual Culture of New England, 1600-1830 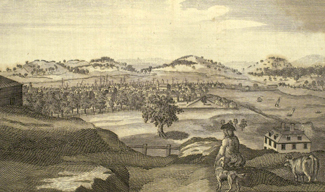 Given the explosion of scholarship in cultural history over the past twenty-five years, what now is the place of objects in the study of the past? What role do material and visual culture studies play in scholarly conversations that range over topics as diverse as race, sexuality, gender, nationalism, ethnicity, power and global interaction? In turn, in the face of increasingly trans-national scholarship in early America what can we gain from attention paid to a single region and its artifacts?

Presenters and participants in the conference will discuss these and other questions as a way of rethinking not just the material and visual world of early New England, but also the techniques by which we can uncover meaning in historic objects and images.

While focused on New England artifacts, Friday afternoon's presentations will turn our attention away from regional particularities to situate objects and images in trans-Atlantic and global contexts. Another panel will reexamine the relationships of objects — from pottery shards to merchant houses — to their economic contexts and assertions of cultural authority. Concepts of memory and remembrance as both public and private expression; the interplay between object and text, and the animacy and sensuality of objects for both maker and viewer will frame sessions on Saturday that examine artifacts of material life as various as funeral processions, biographical needlework, gravestones, book illustrations, portrait miniatures, and waxwork figures. Conference papers also underscore the continued importance of interdisciplinary approaches for material and visual culture studies by featuring the work of archeologists, art historians, social and cultural historians, curators and literature scholars.

A Friday evening plenary session will mark the twenty-five-year anniversary of the exhibition New England Begins and its accompanying three-volume catalogue. In a roundtable discussion, scholars who worked on New England Begins will reflect on the project and its impact on their scholarship as well as on how the disciplines of material and visual culture have shifted since that landmark exhibition and publication.

The conference is open to the public.

6:30 p.m. Reception and Gala Dinner at the Higgins Armory followed by a round table on New England Begins with:

The registration fee is $25, the cost of Saturday lunch is $12, and the cost of the Friday night banquet is $65.

Registration and payment are due by Friday, October 26, 2007.

A block of rooms is being held at the Crowne Plaza Hotel. Please mention the Colonial Society of Massachusetts when you make your reservation. The telephone number for reservations is (508) 791-1600. The rate is $99 plus tax. The cut-off date is October 29.

Other Worcester hotels include:

This conference is sponsored by the Colonial Society of Massachusetts and the Center for Historic American Visual Culture at the American Antiquarian Society in association with Worcester Polytechnic Institute.